By the Annie E. Casey Foundation, The Aspen Institute 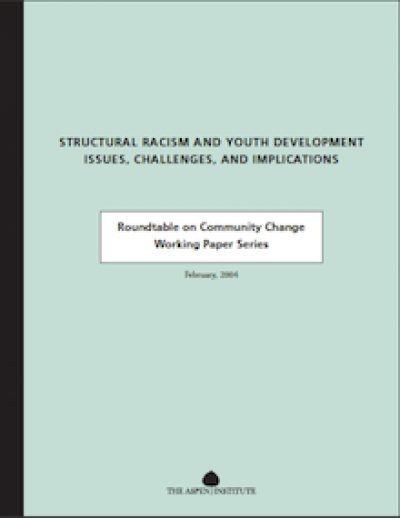 This publication explores the game-changing role that race plays in our country’s politics, economy and culture. It delivers clear examples, recommendations and discussion points aimed at helping the youth field address structural racism and forge a brighter, fairer path for America’s future.

What is structural racism? Simply put, it’s a term to describe the many factors that contribute to and facilitate the persistence of racial inequities in America today.

This report offers experts in the youth field five clear recommendations for enhancing racial equity. One tip? Adopt racially equitable outcomes as an explicit part of your organization’s mission and vision.

In the United States, school districts with the most minority students on record receive $902 less per pupil—or $22,550 less for each class of 25—relative to districts posting the lowest minority enrollment numbers.

Our juvenile justice system treats minority youth with no prior admissions differently than their white counterparts facing similar charges. The extent of this difference is jaw-dropping, with black youth six times more likely and Latino youth three times more likely to experience incarceration in a public facility relative to their white peers.

The disparities in outcomes between youth of color and their white counterparts, not unlike those among adults, are striking, enduring and pervasive.

Racial equity can only occur when whites and Americans of color are equally likely to have positive or negative experiences in employment, education, homeownership, the justice system, and all the other arenas that determine progress and upward mobility in the U.S.

There is consensus among social scientists that the kind of racial stereotyping that undergirds structural racism is virtually automatic, often unconscious and widespread.