Synthesis of Research on Disproportionality in Child Welfare: An Update

By the Annie E. Casey Foundation, Casey Family Programs, Center for the Study of Social Policy 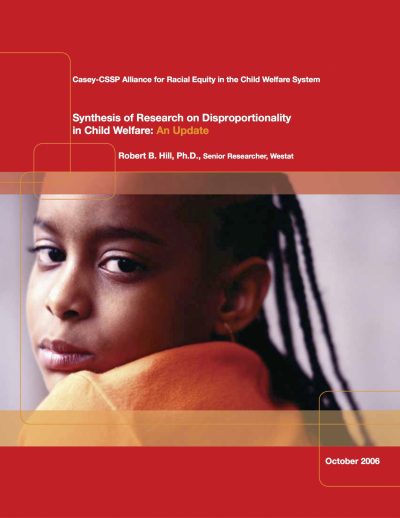 An estimated 60% of U.S. children living in foster care are children of color. Such disproportionate representation of minority children in the child welfare system has long been a concern. This report explores patterns of child maltreatment and disproportionality, and how the race of a child affects decision making at various stages of child welfare – from reporting and investigations to placement in foster care and community factors.

Blacks and American Indians are represented in foster care at twice their proportions in the census populations.

Compared to white children and families in the child welfare system, children of color and their families have less access to services and their outcomes are poorer.

While poverty does not cause child maltreatment, the effects of poverty appear to interact with other risk factors (such as depression, isolation, teenage pregnancy, unemployment, substance abuse, and domestic violence), which increase the likelihood of maltreatment.

A comprehensive review of child welfare research concludes that there is ‘a pattern of inequity, if not discrimination, based on race and ethnicity in the provision of child welfare services.’

More studies are needed on the extent to which disproportionality exists at various stages of CPS decision making and whether disparate treatment occurs in the services provided to all minority children and families (i.e., American Indian, Alaska Native, Asian, Native Hawaiian, other Pacific Islander, Hispanic, and black).