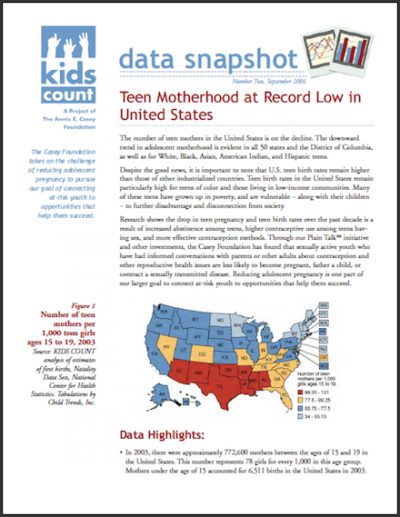 This report — part of the KIDS COUNT Data Snapshot series — shares the latest statistics on teen pregnancy in the United States. It tells how teen birth rates differ by location and race and how the number of teen mothers in America has decreased over time.

When it comes to teen birth rates, America is making progress — but there’s still room for improvement

American Indian, black and Latino teens are two to four times more likely to have a child before entering adulthood compared to their white and Asian Pacific Islander peers.

Girls growing up in Mississippi, New Mexico and Texas are more than three times as likely to become teen mothers compared to their counterparts in New Hampshire and Vermont.

Teen parenthood greatly increases the risk of educational failure. Nearly one in three girls cited pregnancy as the reason they dropped out of school in 2004.

Reducing adolescent pregnancy is one part of our larger goal to connect at-risk youth to opportunities that help them succeed.

Teenage childbearing can have long-term negative effects on both the adolescent mother and the newborn.