Ten Years of the EITC Movement

Making Work Pay Then and Now 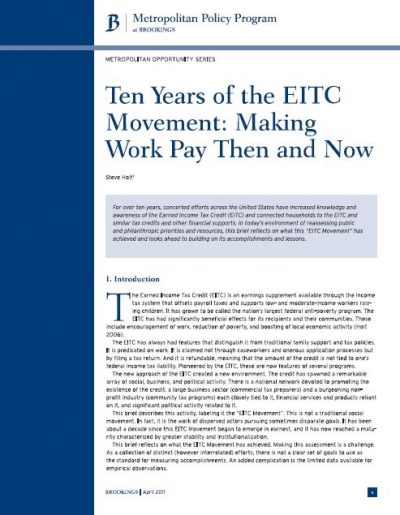 The Earned Income Tax Credit (EITC) is meant to encourage work, reduce poverty, and boost local economic activity by offsetting payroll taxes for low- and moderate-income workers raising children. It is predicated on work, and obtained through filing a tax return. Out of its prevalence and its success, the EITC has spawned an array of social, business, and political activity. There is a national network devoted to promoting the existence of the credit, a large business sector (commercial tax preparers) and a burgeoning nonprofit industry (community tax programs) each closely tied to it. This brief describes this collective activity, labeling it the “EITC Movement,” reflecting on what it has achieved and the growing challenges facing the movement.

The importance of the Earned Income Tax Credit (EITC)

For tax year 1990, the number of eligible families increased by 3.5%, but the number receiving the credit rose by 8%. This is because of the increased emphasis on outreach campaigns, and the development of the commercial tax industry.

Legislation passed throughout the 1980s and 1990s paved the way for Volunteer Income Tax Assistance and the commercial tax industry, and increased access to the EITC for working parents with children.

In 2000, changes in the IRS spurred the growth of independent free tax sites to help prepare returns for low- and moderate-income families. Other changes to the tax code in the early 2000s resulted in a surge in philanthropy to fund outreach and policy work.

Use of the EITC

The Future of the EITC

The future of the EITC must consider 4 objectives: 1) Community awareness of eligibility for tax-based work supports, 2) easy access to tax-based supports, 3) facilitation of sound financial practices, and 4) protection against predatory interference.

The EITC is an extraordinary public program. It is a vehicle for simultaneously pursuing several policy objectives and has served as a blueprint for other program development. Its administrative costs to government are low, its participation rates high, and it has proven successful at encouraging work and reducing poverty.

The activity associated with the EITC Movement has been considerable, though it is hard to quantify its impact. A significant achievement has been the growth of the VITA program. Free tax sites now have a sizeable market share in several cities. The EITC Movement has also been successful in influencing the commercial tax industry and in spurring institutional changes to facilitate the use of the EITC and other tax credits as a foundation for family economic success.