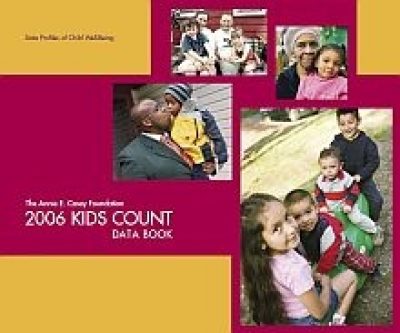 The KIDS COUNT Data Book is an annual publication that assesses child well-being nationally and across the 50 states. The 2006 report begins with an essay, "Family, Friend, and Neighbor Care: Strengthening a Critical Resource to Help Young Children Succeed." The essay makes a strong case for improving the quality of this type of care given its frequent use, especially among low-income families. Providers need far more training and support than they currently receive. Technical assistance, better integration with other community child care providers, greater financial support from state and local governments as well as higher standards would go a long way toward raising the quality of family, friend and neighbor care. Given the critical role of the early years in healthy child development, the essay argues that addressing these issues should be a critical priority.

The remainder of the report provides national and state data on 10 indicators that reflect a range of factors affecting child well-being, particularly health, adequacy of income, and educational attainment. Based on a composite index of the 10 indicators, the three highest ranked states for overall child-being were New Hampshire, Vermont and Connecticut; the three lowest ranked states were Mississippi, Louisiana and New Mexico.  Across the 10 indicators, there was little change in child well-being at the national level since 2000.

In 2004,18% of children lived in poor families, representing a slight increase from 2003 when 17% of children were poor.

Between 2000 and 2003, the percent of babies born with low birthweight increased from 7.6% to 7.9% of all births. During the same period, the infant mortality rate remained the same.

States in the South and Southwest dominated the lower part of the ranking. The bottom 15 states are all located in those regions.

High-quality child care nurtures, stimulates, and supports children as they build the conﬁdence and critical capacities they need to thrive in school and in life. It keeps children safe, promotes good health and nutrition, fosters positive trusting relationships with other children and adults, and supports and supplements parents’ role as their children’s ﬁrst and primary teachers. In addition, quality child care helps parents succeed as workers by providing them with the security of knowing that their children are safe and well supervised while they are on the job.

Family, friend, and neighbor child-care providers contribute to the healthy development of young children, and they help determine how ready millions of American children are to learn and succeed. At the same time, these critical caregivers often are undervalued and under-supported. Although they represent a huge and longstanding segment of our nation’s child-care providers, there are relatively few organized efforts to improve and enhance the quality of the care they deliver. If we strengthen and reinforce their effectiveness, then we can improve outcomes for the children and families who rely on these caregivers.