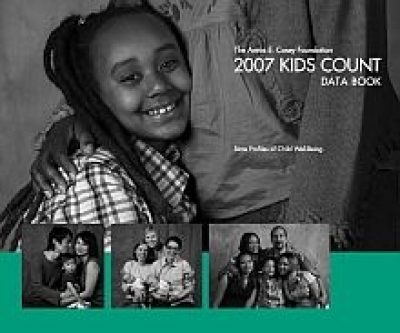 The KIDS COUNT Data Book is an annual publication that assesses child well-being nationally and across the 50 states. The 2007 report begins with an essay, "Lifelong Family Connections: Supporting Permanence for Children in Foster Care," which details the ways in which current child welfare practices put children at risk by emphasizing physical safety rather than creating strong, lasting family relationships that can provide emotional security. African-American children face a much higher risk of being removed from their families and placed in foster care than white children in similar circumstances. The essay describes common sense practices, illustrated with concrete examples, that aim to keep children safe while also prioritizing family permanence.

The remainder of the report provides national and state data on 10 indicators that reflect a range of factors affecting child well-being, particularly health, adequacy of income, and educational attainment. Based on a composite index of the 10 indicators, the three highest ranked states for overall child-being were Minnesota, New Hampshire and Connecticut; the three lowest ranked states were Mississippi, Louisiana and Alabama. Across the 10 indicators, there was very little change in child well-being at the national level since 2000.

Between 2000 and 2004, the percent of babies born with low birthweight increased from 7.6% to 8.1%, reaching its highest level since 1969. During the same period, the infant mortality rate declined slightly.

Nationally, between 2000 and 2005, the teen birth rate fell from 48 births to 41 births per 1,000 teenage girls ages 15 to 19, reaching a record low. This decline was reflected among every major racial and ethnic group.

States in the South and Southwest dominated the lower part of the ranking. Except for West Virginia, the 10 states with the lowest overall rank in terms of child well-being are all located in the South or Southwest.

For Casey, permanence means establishing an enduring family relationship that is safe and meant to last a lifetime; offers legal rights and social status of full family membership; provides physical, emotional, social, cognitive, and spiritual well-being; assures lifelong connections to extended family, siblings, and other significant adults; and promotes an understanding about a family’s racial and ethnic heritage and traditions.

But the reality is that advancing any reform also requires federal action since policies at this level drive so much of what happens in child welfare systems nation-ally. Changes in two specific areas—financing and accountability—are essential for raising the level of urgency about the need for permanence and making it an achievable goal.