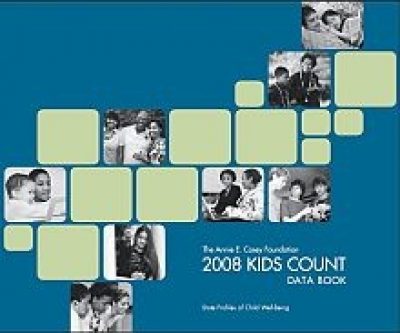 The KIDS COUNT Data Book is an annual publication that assesses child well-being nationally and across the 50 states. The 2008 report begins with an essay, “A Road Map for Juvenile Justice Reform,” which critiques the prevailing approach to juvenile justice as costly and ineffective, even harmful, and lays out promising alternatives. Arguing that "get tough" policies have produced negative outcomes for young adults and their communities, the essay describes alternative programs and practices that have the potential to transform juvenile justice systems and improve the odds for troubled youth. Concrete examples illustrate how these alternative approaches are working in practice.

The remainder of the report provides national and state data on 10 indicators that reflect a range of factors affecting child well-being, particularly health, adequacy of income, and educational attainment. Based on a composite index of the 10 indicators, the three highest ranked states for child-being overall were New Hampshire, Minnesota and Massachusetts; the three lowest ranked states were Mississippi, Louisiana and New Mexico. At the national level, child well-being stagnated since 2000 after improving in the late 1990s.

Prevailing “get tough” approaches to juvenile justice contradict what we know about youth development and behavior.

Between 2000 and 2005, the percent of babies born with low birthweight increased from 7.6% to 8.2%, reaching its highest level in 40 years. During the same period, the infant mortality rate remained the same.

Except for Maine and Rhode Island, all of the New England states ranked in the top 10.

In the Northern Plains, Iowa, Minnesota, Nebraska, North Dakota, and Wisconsin all ranked in the top 12.

At the other end of the spectrum, states in the South and Southwest dominate the lower rankings.

Except for West Virginia, the 10 states with the lowest overall rank in terms of child well-being are all located in the South or Southwest.

Among all of the policy areas affecting vulnerable children and families, juvenile justice has probably suffered the most glaring gaps between best practice and common practice, between what we know and what we most often do. Perhaps because it serves an unpopular and powerless segment of our society—behaviorally troubled, primarily poor, mostly minority teenagers—juvenile justice policy has been too long shaped by misinformation, hyperbole, and political prejudices.

Fortunately, alternative policies, practices, and programs have emerged that have the potential to fundamentally remake our juvenile justice systems and greatly improve the odds of success for troubled youth. Moreover, most of these alternatives have already been implemented effectively, providing a clear and compelling road map for reform.