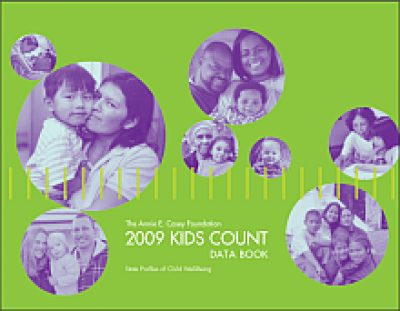 The KIDS COUNT Data Book is an annual publication that assesses child well-being nationally and across the 50 states. The 2009 report begins with an essay, “Counting What Counts: Taking Results Seriously for Vulnerable Children and Families,” which articulates the case for using data-driven policymaking to improve results for children. Acknowledging that some progress has been made, the essay nonetheless urgently calls for leaders at all levels of government to create much more robust systems of data collection and analysis to measure child and family well-being as well as policy and program effectiveness. Particularly in times of economic crisis and fiscal constraint, high-quality information is essential to ensure sound and efficacious investments for children and families in need.

The remainder of the report provides national and state data on 10 indicators that reflect a range of factors affecting child well-being, particularly health, adequacy of income, and educational attainment. Based on a composite index of the 10 indicators, the three highest ranked states for child-being overall were New Hampshire, Minnesota and Utah; the three lowest ranked states were Mississippi, Louisiana and Alabama. At the national level, child well-being stagnated since 2000 after improving in the late 1990s. Due to time lags in data availability, the findings do not capture the effects of the economic downturn.

On 9 of the 10 measures of child well-being tracked in the report, children in Puerto Rico fared worse than the U.S. average.

All 10 of the lowest ranked states for overall child well-being are in located in the Southeast and the Southwest.

Results matter, and achieving positive results requires us to keep our eyes on the prize: carefully measuring the well-being of children; setting meaningful goals for their care and development; identifying those who are suffering or left behind; strategically publicizing the performance of public programs; and maintaining society’s focus on the evolving, objectively measured needs of the next generation.

The 10 indicators used to rank states reflect a developmental perspective on childhood and underscore our goal to build a world where pregnant women and newborns thrive; infants and young children receive the support they need to enter school prepared to learn; children succeed in school; adolescents choose healthy behaviors; and young people experience a successful transition into adulthood.