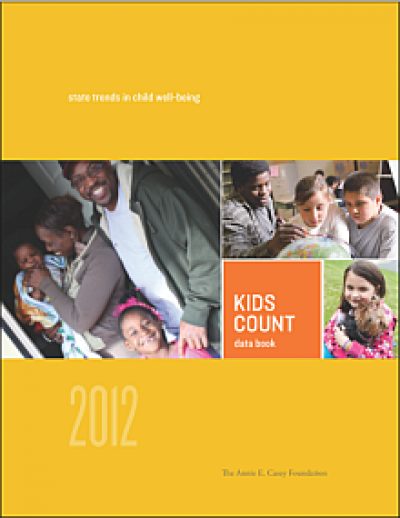 The KIDS COUNT Data Book is an annual publication that assesses child well-being nationally and ranks the 50 states. To take advantage of the tremendous growth in research and data about child development, the 2012 report introduces a new, more comprehensive measure of child well-being -- a composite index derived from 16 key indicators grouped into four domains: (1) economic well-being, (2) education, (3) health and (4) family and community. The three highest ranked states for overall child-being in 2012 were New Hampshire, Massachusetts and  Vermont; the three lowest ranked states were Nevada, New Mexico and Mississippi. At the national level, children experienced gains in education and health, showing continued incremental improvement in line with longer-term positive trends. But economic well-being declined: child poverty increased, more children had parents who lacked secure employment and more children lived in families that faced high housing cost burdens. Results for the family and community domain were mixed.

Despite the end of the recession, the economic well-being of children and families deteriorated.

Despite tremendous gains in recent decades for children of all races and income levels, inequities among children remain deep and stubbornly persistent. In 2010, 13% of white children lived in poor families compared to 38% of African-American and 32% of Latino children.

Northeastern States Come Out On Top

Regionally, all northeastern states ranked in the top 15 on  overall child well-being except for Rhode Island and  New York, both of which fell in the middle.

States in the Midwest

States in the industrial Midwest ranked in the middle on overall child well-being,  while some of the states farther west—Minnesota,  North Dakota, Iowa and Nebraska—were in the top 10.

States in the Southeast, Southwest, and Appalachia

States in the Southeast, Southwest and  Appalachia—where the poorest states are located—populate the bottom of the overall  rankings. In fact, with the exception of  California, the 17 lowest ranked states in terms  of child well-being are located in these regions.

As we release this year’s Data Book,, our 23rd, America’s children and families face  a crossroad. After the worst economic crisis since the  great Depression, our economy has begun to slowly recover. Unemployment has declined and state revenues are trending upward. But the recovery is fragile. Many families are still coping with hardship caused by a long and deep recession,  and states and localities still face serious fiscal challenges.

Unlike the domains of Education and Health, where children are benefiting from long-term progress overall, the Economic Well-Being of children and families has plummeted because of the recession. After declining significantly in the late 1990s, child poverty began to rise even before the economic crisis. In 2000, the official child poverty rate, which is a conservative measure of economic hardship, was 17 percent. From 2000 to 2010, the number of children living in poverty jumped from 12.2 million to 15.7 million, an increase of nearly 30 percent.