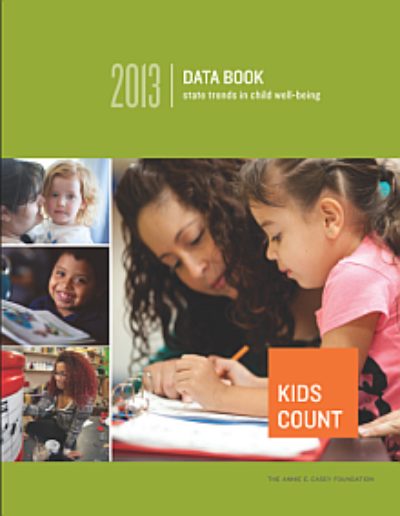 The KIDS COUNT Data Book is an annual publication that assesses child well-being nationally and across the 50 states. The 2013 report calculates a composite index of overall child well-being for each state derived from 16 key indicators grouped into four domains that capture what children need to thrive: (1) economic well-being, (2) education, (3) health, and (4) family and community. For 2013, the three highest-ranked states for child well-being were New Hampshire, Vermont and Massachusetts; the three lowest ranked were Nevada, Mississippi and New Mexico. The report also provides national trends, comparing recent data with data from mid-decade. The findings indicate that child health and education improved despite the recession, but economic and family/community well-being declined, with an increase in child poverty, insecure employment among parents and more children and families living in high-poverty neighborhoods.

Young children face greater risks to their well-being than older children; they are more like to live in a single-parent household and they experience higher rates of poverty.

Disparities among children by race/ethnicity remain severe. For example, only 4% of white children live in high-poverty neighborhoods compared to 28% of African-American and 21% of Latino children.

States in the Northeast

All the northeastern states rank in the top 15 in terms of overall child well-being, except for Pennsylvania, Rhode Island and New York, which fall in the middle.

States in the Midwest

Most of the states in the industrial Midwest rank in the middle on overall child well-being, while some of the states farther west — Minnesota, North Dakota, Iowa and Nebraska — are in the top 10.

States in the Southeast, Southwest and Appalachia

States in the Southeast, Southwest and Appalachia — where the poorest states are located — populate the bottom of the overall rankings for child well-being, but for the first time in the Data Book’s 24-year history, Mississippi moved out of the bottom spot and was replaced by New Mexico.

This year’s KIDS COUNT Data Book provides some hopeful signs. The latest data show continued incremental improvement in educational achievement and child health and safety,  as well as a record low level of teen births. At the same time, children and families are still coping with the effects of the recession and continued high unemployment. Child poverty continued to climb in 2011, two years after the recession  ended.

... three troubling trends emerge. First, we see lingering effects of the recession and continued high unemployment. Second, disparities among children by income and family structure continue to grow. (In contrast, while some disparities by race and ethnicity have increased, others have narrowed.) Third, our nation’s youngest children are disproportionately affected by these negative trends.