The Changing Face of the United States

The Influence of Culture on Early Child Development

By ZERO TO THREE 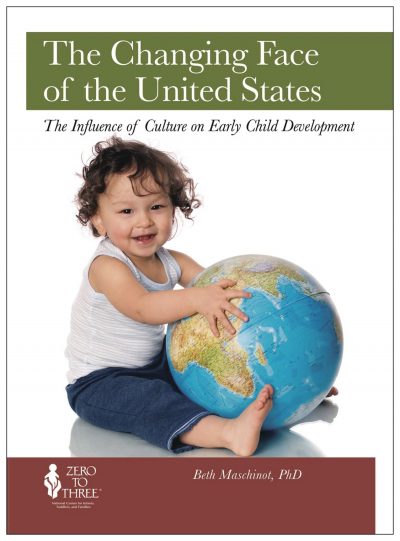 The nonprofit ZERO TO THREE scoured the scientific literature—and summarized the findings of 41 related research studies—in this resource-packed report about culture’s impact on parenting and early child development. The goal? Give child welfare workers the framework and facts necessary to adopt culturally-sensitive practices that will better serve all of America’s families.

Cultural scripts—whether a parent is aware of them or not—guide a caretaker’s decisions about child rearing.

How do you adopt a culturally-sensitive practice? Tip no. 1: Learn the family’s cultural script. Tip no. 2: Learn your own—and understand how it informs your work.

In individualistic cultures, caretakers encourage children to be independent and assertive. Babies are taught to sleep alone, eat alone, play alone and dress themselves at an earlier age.

Parenting decisions in interdependent cultures reflect an emphasis on cooperation and connections. For example, these parents promote group play and are more likely to co-sleep and breastfeed longer.

Generally speaking, Americans top the charts in terms of valuing individualism. Still, most of our immigrant families carry quite the opposite, interdependent viewpoint.

Research suggests that culture can impact how families communicate. For example, it can influence the questions that mothers ask (or don’t ask!) as well as their communication styles and priorities.

Across all classes and ethnicities, the following relationship holds true: As a child’s exposure to words increases, so does his or her vocabulary.

Most studies support the notion that multilingual learning has no mal-effects. On the contrary, it enhances literacy and cognitive flexibility while supporting cross-cultural learning.

Like the realization that 'families matter,' it is becoming clearer and clearer that 'culture matters.'

As of the year 2000, 1 in 5 of the birth-to-3 population (3.2 million children) in the United States lives in an immigrant family.