The Context and Meaning of Family Strengthening in Indian America

By The Harvard Project on American Indian Economic Development 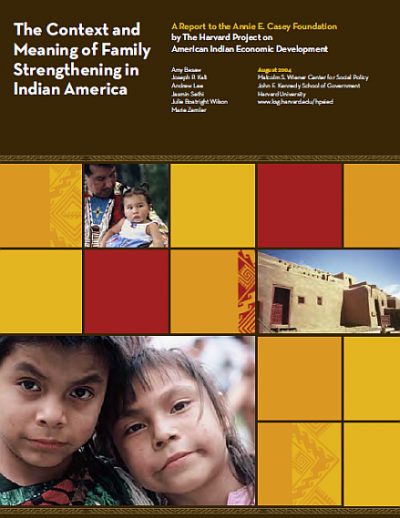 This report attempts to gage the meaning and effectiveness of family strengthening efforts in the myriad Native American Indian communities. The finding: if it isn’t home-grown, it isn’t going to fly in the Indian communities. Several case studies demonstrate what is working while recommendations provide nonprofits and foundations with tips on effective tribal self-determination.

The absolute poorest communities documented in the 2000 U.S. census are Indian reservations.

Some reservations report that more than 90% of all dollars came from federal support programs.

Self-determination means Native control of policies and institutions, including control over the very definition of “family.”

The leading killers of Native Americans are alcoholism, diabetes and suicide.

Based upon the research described below, we conclude that the framework for “family strengthening” in Indian America is built around Native self-determination at both the personal and community level.

The Whirling Thunder Wellness Program is a shining example of how a tribe, using its sovereignty, can respond to a compelling health crisis on its own terms and successfully alter lifestyles using culturally appropriate means.

Because the hundreds of tribes and tribal communities have always had distinct histories and cultures, variations abound along everything from governmental form to religious practices to Native language use to family structure to economic system to the role of elders to the degree of Indian/Non-Indian intermarriage.

Since definitions of “family” are also culturally specific, it is even more important that Native communities decide for themselves what strategies to employ when it comes to conceiving of “family strengthening” in ways that are meaningful in their particular community context.