A Commitment to Economic Inclusion 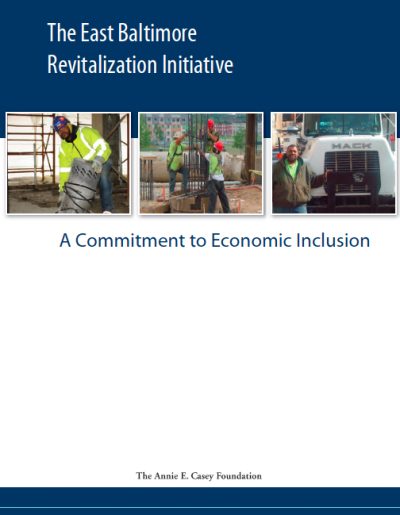 The East Baltimore Revitalization Initiative is a large-scale community and economic development project to transform a distressed property into a vital residential and business community. The project, which drew from the experiences of cities across the country, seeks not only to improve the aesthetics of the neighborhood but to improve the lives of those who live there—including a focus on creating opportunities for minority- and women-owned businesses. This report documents the progress, lessons learned and achievements of the East Baltimore project through its first phase.

Opportunities for Women and Minorities

37% of EBDI's contract, totaling $67.2 million in revenues, were awarded to minority- and women-owned businesses through the end of 2010.

As of December 31, 2010, women and minorities had worked 57.5% of the total hours generated by the project—far surpassing the original goal of 15%.

78% of people placed in jobs through the Workforce Pipeline retained their job for at least a year, surpassing the goal of 60%.

Economic inclusion is central to the fundamental purpose of the East Baltimore redevelopment, which is to repair and enhance both physical and human capital.

I enjoy making money, paying bills, not asking anybody for nothing and not doing anything wrong to get nothing; just working hard.

– Shawn Cherry, 41, East Baltimore native who got a job as a plumber's assistant through the Workforce Development Pipeline