A Case Study of Responsible Redevelopment 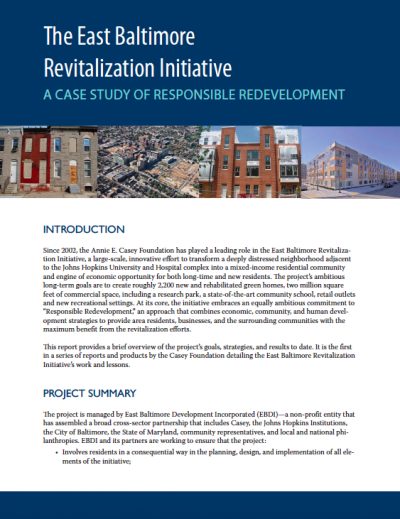 This report, the first in a series produced by the Casey Foundation, outlines the East Baltimore Revitalization Initiative in Maryland and its efforts to transform a neglected neighborhood into a thriving community for longtime and new residents.

A Promising Work In Progress

The Middle East section of East Baltimore was one of the city's poorest neighborhoods, with a median income of $14,900--less than half that of the city as a whole.

Prior to EBDI, Middle East's crime, domestic violence and child abuse rates were far above those of the city as a whole, with high unemployment and vacancy rates compared to the rest of Baltimore.

By 2010, more than 630 households had been relocated, with a number of residents moving from renters to homeowners, and prior homeowners increasing their home values exponentially.

The Foundation also knew that East Baltimore retained a sizable core of residents who were devoted to their neighborhoods. Based on the failure of previous revitalization efforts, however, many of these community residents harbored considerable skepticism, distrust, and resentment of outside entitiesnot only for their failure to deliver on previous promises, but also for consistently failing to acknowledge the voices, interests, and needs of neighborhood residents in their plans for the area.

The East Baltimore Revitalization Initiative remains a work in progress. Already, though, it has achieved many successes—particularly in relocation, demolition, economic inclusion, financing, and the sustained alignment of the public, private, philanthropic, and community sectors. These achievements have surpassed the early expectations of stakeholders and are advancing new standards and practices for the field of urban redevelopment.