The Effects of State EITC Expansion on Children's Health 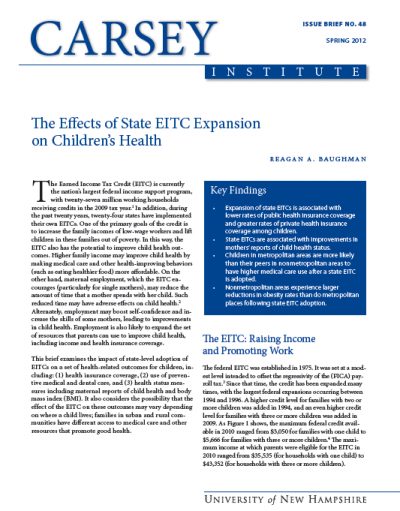 The Earned Income Tax Credit provides a boost in family income to more than 27 million working households across the United States. Over the past 20 years, 24 states have also adopted EITCs to provide additional support. This brief examines changes in children's health outcomes in the 14 states that adopted EITCs from 1996 to 2006.

A state-level EITC is associated with improved children's health

There was a 2.5% increase in the number of moms who reported their child to be in "excellent health" after their state implemented EITC. Even accounting for other factors, the increase in excellent health status was significant for children ages 11 to 14.

Numerous research studies have suggested that the EITC has increased family income, reduced child poverty, and promoted employment, particularly for single mothers who have low levels of education.

Considerable evidence suggests that better health in childhood translates to both better health outcomes later in life and better educational and employment outcomes.