The Eye of the Storm

Ten Years on the Front Lines of New Futures 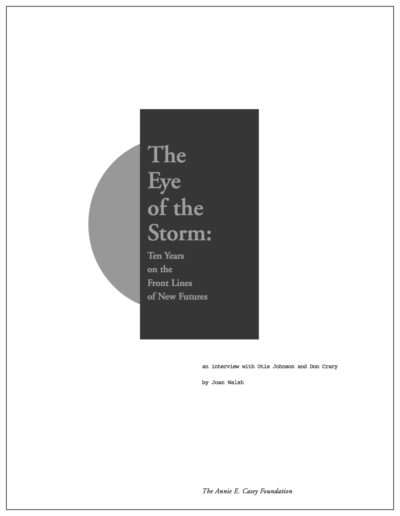 Helpful services aren’t really at the core of how kids survive, much less thrive. But that was an unknown for Casey’s first attempt at comprehensive community change. The New Futures initiative granted $10 million over five years to each of five cities willing to experiment with collaborative, comprehensive, public private approaches to the multiple problems of “at-risk” children. And then they found out that community change requires both collaboration and confrontation, because systems won’t reform without a strong public demand for it, while at-risk kids just want a bonding relationship that matters. This reflection presents the lessons that shaped Casey's work for almost two decades.

Tackling the Most Difficult

System reform is about changing relationships as well as changing service delivery. The relationship piece is a much more difficult agenda.

Families have real needs and systems have real money. It takes a top-down and a bottom-up approach to get all the players at the table for real support.

Having a geographic definition helps focus attention, players and resources on what needs to change.

No one starts out ready to change. You have to build leadership and capacity toward what and how to change.

Casey President Douglas W. Nelson is frank about the major flaw in the New Futures design: ‘We all assumed that somebody somewhere knew what a comprehensive, community-based integrated support system really looked like. And we were wrong.’

Data painted a clear picture of the gaps between white and black families on nearly every front, from school achievement to infant mortality to income. But handling such troubling data required comfort with racial differences that rarely comes naturally.

Too often, collaborative initiative planners seem to be looking for an extra-political solution to what is essentially a political problem — the dispossession and exclusion of the poor, particularly the poor of color, from the political and market systems that work for most other Americans.

New Futures did not start out with an explicit focus on race… But from the beginning race posed a challenge to each individual city’s leadership and the Foundation.