The Re-Emergence of Concentrated Poverty

Metropolitan Trends in the 2000s 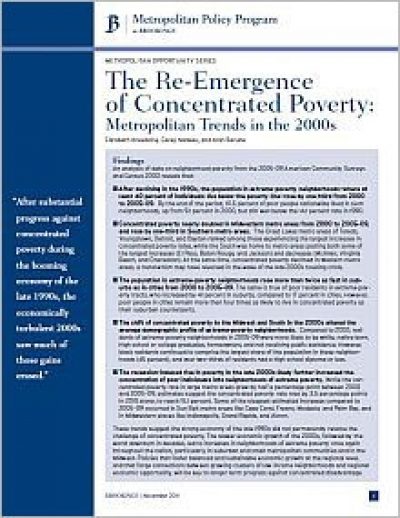 Despite the strong economy of the late 1990s, concentrated poverty persisted. The slowed economic growth of the early 2000s followed by the most severe economic downturn in decades led to increases in neighborhoods of extreme poverty once again throughout the nation. These neighborhoods are growing in suburban and small metropolitan communities, particularly in the Midwest.

Over a 10-year span, the country saw the poor population grow by 12.3 million, driving the total number of Americans in poverty to a historic high of 46.2 million – over 15% of the nation’s population living below the federal poverty line.

These trends have changed the location of poor households within urban, suburban and rural communities. Considering the geographic distribution of poverty is important to addressing social problems such as crime rates, poorer health outcomes, lower-quality educational opportunities and weaker job networks. Areas of concentrated poverty create a “double burden” by adding burdens set by where they live to their own personal burden of poverty.

The nation’s 100 largest metropolitan areas are home to two-thirds of the nation’s residents.

Gains Have Been Erased

The Midwest and the South

Concentrated poverty nearly doubled in Midwestern metro areas from 2000 to 2005-09, and rose by one-thid in Southern metro areas.

The Suburbs See it Too

The population in extreme-poverty neighborhoods rose more than twice as fast in suburbs as in cities from 2000 to 2005-09.

Compared to 2000, residents of extreme-poverty neighborhoods were more likely to be white, native-born, high school or college graduates, homeowners, and not receiving public assistance. Black residents comprised 45% of these neighborhoods.

The poverty that resulted from the recession in the late 2000s likely increased the concentration individuals living in extreme poverty. Estimates suggest that concentrated poverty rose by 3.5 percentage points in 2010 alone, reaching 15.1%.

After substantial progress against concentrated poverty during the booming economy of the late 1990s, the economically turbulent 2000s saw much of those gains erased.

Policies that foster balanced and sustainable economic growth at the regional level, and that forge connections between growing clusters of low-income neighborhoods and regional economic opportunity will be key to longer-term progress against concentrated disadvantage.