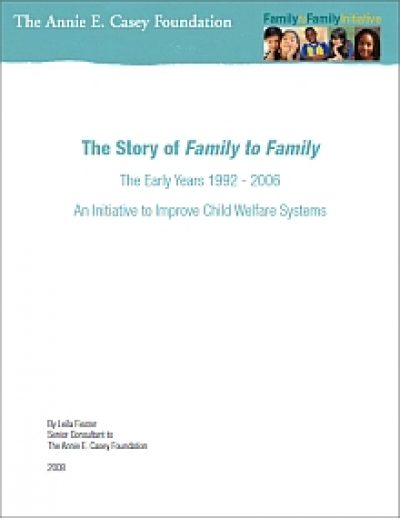 The core premise of Family to Family is that the child welfare system’s job is to protect children from danger, meet their basic physical and emotional needs, and attach or re-attach them to caring, safe families.This report details the early crafting, implementation and lessons learned from a Casey initiative that put families and kids first and impacted how this philanthropy’s work gets done. It is part of the Foundation’s ongoing effort to distill and share insights about philanthropic practice from our initiatives.

Society has no practical, reliable replacement for a caring family.

The Foundation's vision is that all children affected by the child welfare system have families and communities that support them and protect them from harm.

One of the child welfare system’s key jobs is to link birth families, foster youth and resource families to community networks of support, during and after involvement in the system.

Between 1990 and 2000, in the states with multi-year data, investigators substantiated more than 400,000 of 1.2 million abuse and neglect reports every year.

The children coming into foster care and staying there the longest were twice as likely to be African American as white, in part because the undermining effects of poverty, inadequate housing and drugs hit that population the hardest.

Neighborhood-based placements also reduce the amount of disruption experienced by the child and keep the financial resources that follow children (for foster care, education, and other services) in the community.

Out-of-home placements dropped 50% to 60% within six months after Team Decision Making was instituted.

By 2005, 55% of the nation’s foster children lived in states implementing Family to Family.

Factors outside the control of the child welfare system have always shaped the system’s priorities and outcomes. In the economically turbulent 1980s, persistent poverty increased the emotional stress of parents who were already pushed to their limit, and many faced homelessness.

"Leading with ideas, not money” was a revolutionary concept for national foundations at the time, but it was so effective it became the mantra of later Annie E. Casey Foundation initiatives.

System reform is not static or time-bound. The changes we seek to institutionalize are constantly adapting in response to the environment.

Instead of focusing on bureaucratic procedures, Family to Family’s trainings emphasize partnership between the child welfare agency and the foster family and between the birth and foster families.