The Unequal Distribution of Child Poverty 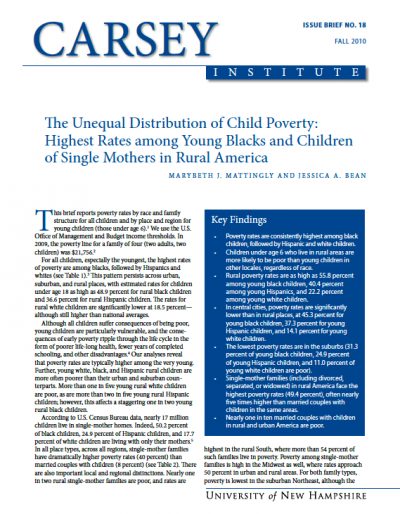 This report examines poverty rates throughout the United States based on race and family structure for children of all ages as well as by place and region for children under age 6.

Location Matters Across all categories, black children have the highest poverty rates. Young black children are nearly three times as likely to live in poverty as young white children, and more than twice as likely as young Hispanic children.

Regardless of race, young children living in rural areas are more likely to be poor than their peers in suburban and urban communities. Rural poverty affects one in two young black children, two in five young Hispanic children, and one in five white children.

Although all children suffer consequences of being poor, young children are particularly vulnerable, and the consequences of early poverty ripple through the life cycle in the form of poorer life-long health, fewer years of complete schooling, and other disadvantages.