To Adapt Interventions to Serve Youth That Have Been Marginalized, Service Providers Can Seek Funding From Public Agencies 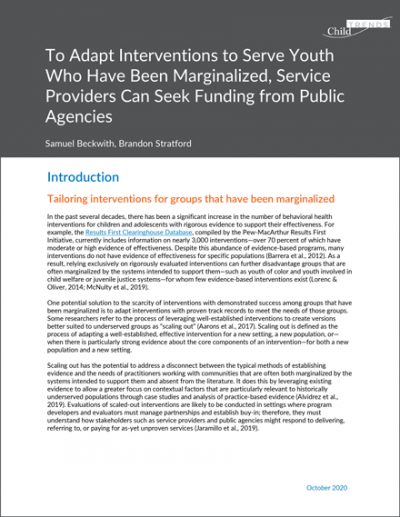 This brief presents research — funded by the Annie E. Casey Foundation — on the experiences of two neighboring jurisdictions that worked to implement an intervention called Multisystemic Therapy for Emerging Adults (MST-EA).

The intervention, adapted from a rigorously tested evidence-based approach called Multisystemic Therapy, aims to bridge a gap in behavioral health services for youth and adults.

The document explores how service providers and public agencies might respond if asked to invest in an untested adaptation of an intervention, such as MST-EA. It also identifies lessons and hurdles that the two jurisdictions encountered while trying to implement MST-EA.

The research indicates that, given the right circumstances, public officials are open to paying for services as part of evaluations of adapted interventions. This is particularly true when such services are helping to meet the needs of underserved and marginalized populations.

The challenge: A shortage of evidence-based interventions that support emerging adults

Public officials and service providers were willing to refer youth to the adapted intervention for services — despite limited evidence of its effectiveness — because of the rigorous evidence behind the original intervention.

Public officials and service providers were willing to refer youth to an adaptation with limited evidence because they viewed it as filling a critical gap in services for a historically underserved population.

Although some relationships in the MST-EA initiative were challenging, some partners had already successfully collaborated for years. Without these strong relationships, the initiative might have failed to move forward.

Delivering an intervention with adapted components, in a new setting or with new populations, will always involve uncertainty regarding effectiveness.

Partners should dedicate time early in the process to determine an equitable approach to funding the joint initiative and engage in ongoing, transparent communication to identify and address potential financial challenges.