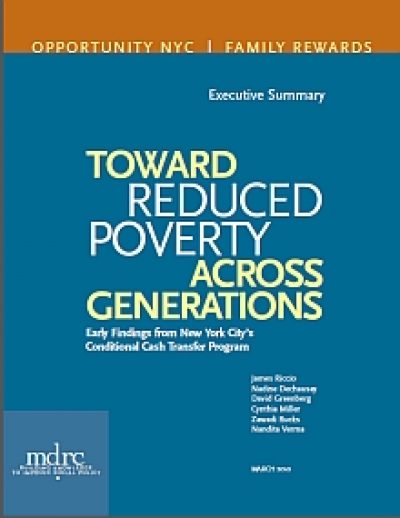 Over $14 million in rewards was paid to families in the first 2 years of the program.

98% of families earned at least some rewards in both program years— more than $6,000 on average.

Family Rewards increased savings and the likelihood that parents would have bank accounts.

…impressed by the success of Oportunidades and other countries’ CCT programs, Mayor Michael Bloomberg’s Center for Economic Opportunity (CEO) began to explore whether a CCT program could be adapted for use in New York City’s poorest neighborhoods. By 2007, Opportunity NYC–Family Rewards had been born. Aware that a CCT program would be controversial, CEO sought and obtained private funding for the initiative in the hope that, if it were successful, the federal government would provide additional support to expand the program to cities nationwide.

Family Rewards imposed no restrictions on families’ access to their reward money or how they could spend it, and families used the extra money in a variety of ways. Common uses included paying for basic living expenses, paying off bills, paying for school-related supplies or activities, saving for the future, buying electronic goods, and covering special recreational outings for the family, sometimes as a reward for school accomplishments. For many families, celebration of accomplishments took the form of spending time together on leisure activities, like eating out, going on a trip, or seeing a movie that would otherwise have been prohibitively expensive, especially for larger families with limited means. Many parents also used the money for children’s allowances.