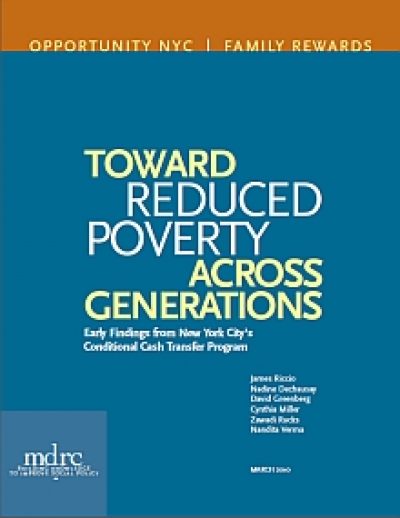 Family Rewards is a two-generation initiative for parents and children with both short-term & long-term poverty-reduction goals.

As a two-generation intervention, eligible families had to be legal residents of the United States and have a 4th, 7th or 9th grade school-aged child.

Family Rewards was designed to avoid case management or intensive hand-holding, focusing instead on directing incentives toward participants. This test model was seen as easier and less costly to operate on a larger scale.

Some parents did not see the program as a way to make significant changes in their lives and collected rewards only for things they were already doing.

Because Year 1 involved both intense enrollment efforts and the creation of payment systems, customer service guidelines, and marketing strategies, the early operation of the program was problematic in many ways. Operations were much improved in Year 2 as staff resolved many initial problems, refined their practices, and gained experience. Reflecting these improvements, participants generally held positive views of Family Rewards, and the program was able to deliver on its promise of payments.

By the end of the second year of Family Rewards, Seedco had transferred approximately $14.7 million to participating families. The capacity to deliver these payments depended on the creation of a verification and cash transfer system that involved manual as well as automated processes and that could accommodate 22 different rewards and the particular conditions and verification requirements that were attached to each of them. In some respects, this system is the core of Family Rewards. As a CCT program, paying for performance is fundamental to the model’s theory of change.

Overall, the initial results from the New York City project lend support to the growing list of studies showing that a CCT approach can both reduce immediate poverty and hardship and promote at least some improvements in families’ own human capital investment. The early findings also demonstrate that the CCT concept can be successfully adapted and implemented in the context of a large city in a highly developed country.