From Demonstration Project to National Standard 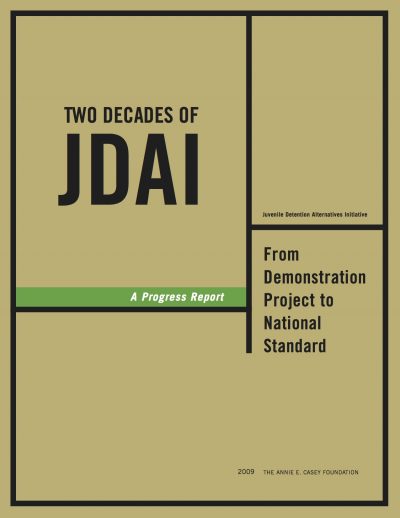 The Juvenile Detention Alternatives Initiative (JDAI) started in the 1990s as a five-site demonstration project of the Annie E. Casey Foundation to keep kids out of jail. By 2009, it operated in 110 local jurisdictions in 27 states. This report documents JDAI’s progress both in reforming juvenile detention practices nationwide and contributing to the larger, more comprehensive juvenile justice reform movement.

Decreasing detention through JDAI is making communities safer in the long-term.

Detained youth are more than three times as likely to be found guilty and jailed as non-detainees.

61% of U.S. youth were in states with at least one JDAI site at the time of this report.

24 JDAI sites had reduced their detention populations by 50% or more by 2009.

Serious crime arrests had decreased significantly before JDAI started, but detention rates had not.

As one chief probation officer said about his detention population, “These are kids we are angry at, not kids we are scared of.

JDAI stands out as an unusually influential systems-change initiative. In 2003, the longtime director of the National Juvenile Detention Association, Earl Dunlap, described JDAI as “the single greatest reform ever undertaken in juvenile justice programming.” Since then, the JDAI reform movement has continued to grow.