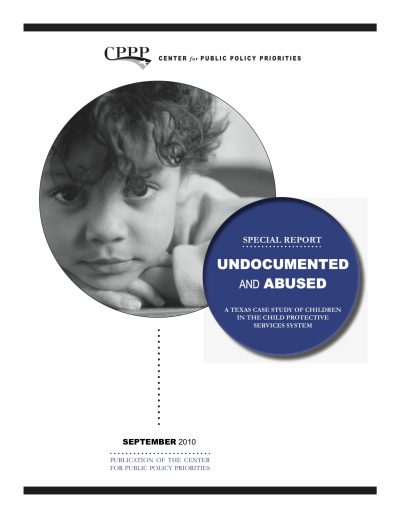 Using Texas as a case study, this report looks at undocumented children in state child welfare systems because of abuse or neglect – and ways to improve the process by which these children may obtain legal residency. The report  explains alignment between federal immigration and child welfare law, and the federal government’s role in financially supporting states to care for undocumented children.

Undocumented children are more than five times as likely to come into state care for sexual abuse.

Parents are the dominant perpetrators of abuse and neglect. For undocumented children, however, mothers are less likely to hurt their children.

Undocumented children in care are more likely to live in a foster home.

In Texas family law, a court can continue jurisdiction over a child after age 18.

A policy of uniformly sending children back to their country of origin would be as irresponsible as leaving them in their abusive home here in the United States.

The federal government controls immigration policy and enforcement. As a result, it should subsidize the foster care and Medicaid costs of any undocumented child who ends up in state custody because of abuse or neglect.