Generation Change and the Leadership of Nonprofit Organizations

By the Annie E. Casey Foundation and Evelyn and Walter Haas, Jr. Fund 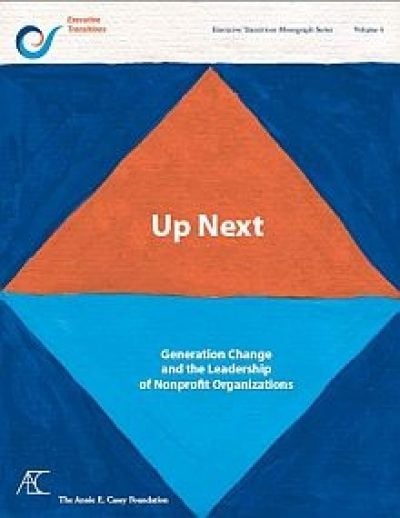 As the Baby Boomers edge into their 50s and 60s, nonprofit organizations will soon be making room for a new generation of leaders. Not only should organizations consider the generational differences that will impact leadership styles, but also consider that members of Generation X, now in their 20s and 30s, are a dramatically smaller group than the Baby Boom generation. This 2005 monograph reports on the findings of a study conducted by the Building Movement Project on generational difference in leadership in small- and mid-sized social change organizations.

If there is a real interest in sustaining and building existing social change organizations, we need to promote younger leaders.

GenXers are Up Next

A 2004 survey of executives in organizations supported by the United Way in New York City reported that 45% planned to leave in the next five years.

A 2002 study of 119 community foundations found that three out of five (61%) had had the same CEO during the last decade, but only 55.3% of the surveyed executives expected to transition within five years.

In 2001, the Maryland Association of Nonprofits reported that it expected 78% of its members and executive directors to leave in the next five years.

Qualities of Leaders are Consistent

The interviews found few differences -- either by age or position -- in the qualities that respondents thought made good leaders.

Recommendations: Invest in younger leaders, identify and nurture more leaders of color, make it viable for directors to leave, broaden sites of intergenerational discussion, examine current organizational structures and expectations, and promote a healthier balance between work and personal life.

Now, as we make our way into the next century, building power and change for the future, we need to look at the new generation of leaders who are poised to shape and drive this work.

As Generation X begins to take on leadership positions in corporations, government, and nonprofit agencies vacated by Baby Boomers, this idea of divergent values takes on new meaning.