By Corporation for Enterprise Development, The Annie E. Casey Foundation 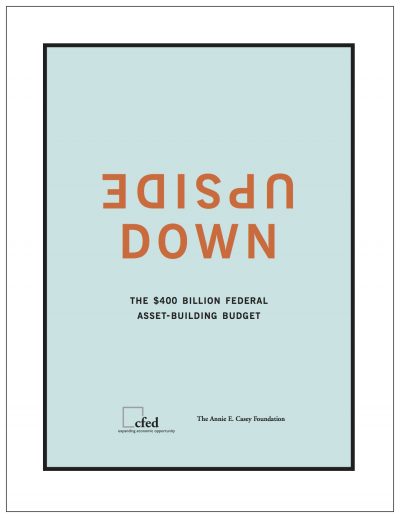 Economic mobility in the United States means the working poor are expected to bootstrap their way into the middle class, as middle-class families climb to greater wealth. But for the first time, we face a scenario where that may not happen. Income is not enough as assets, too, are needed to progress in the American economy. While the federal government pours out millions to help with asset building, this report shows how using the tax code for subsidies is hurting the lower income and middle class while helping the wealthy get wealthier with no oversight easily available.

For the poorest families, federal policy actually penalizes efforts to save money by cutting off benefits to those who manage to create even the smallest financial cushion.

Over half of the $400 billion in federal asset-building benefits went to the top 5% of taxpayers, those earning more than $167,000.

The data in this study are compiled from the FY 2009 federal budget. Data on direct outlays come from line items in departmental budget appropriation documents. Data on tax expenditures come from the U.S. Congressional Joint Committee on Taxation. All figures cited in the study are in nominal dollars.

At a time when the economic downturn has left many low- and middle-income families struggling to get by, we can ill afford a federal wealth-building strategy that primarily helps those who are already wealthy.

Redirecting the federal dollars spent on building assets more equitably would not only help poor families gain a foothold in the economy, it would fortify middle-class households.

What we can do is work toward creating a more equitable and transparent set of strategies for saving money and building wealth. That means changing the way we deliver this asset-building assistance.