Using Brain Science to Design New Pathways Out of Poverty 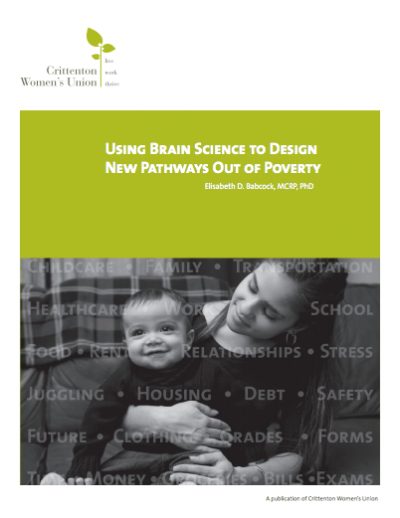 This report, by Crittenton Women’s Union (CWU) is based on evidence of the effects of poverty on the brain and a series of specific brain science-informed social policy and program approaches that target low-income families. It covers best practices for intensive coaching to improve individuals’ decision-making processes and other executive function (EF) skills that are critical to holding a job, pursuing education and maintaining personal finances.

This report applies what we are learning about brain development and the effects of chronic stress on tangible new approaches to combatting entrenched poverty and moving families to economic independence.  It includes recommendations for policy and program changes that can be easily adopted to help build the skills adults need to both attain economic stability and create an environment that helps their children to develop their own adaptive skills.

Low-income single mothers living in public housing and participating in CWU's deepest engagement programs for an average of three years graduate from community college at twice the rate and in half the time of the average community college students where they attend.

Participants' personal savings increased, on average, from $0 to $1,528 per person.

Among low-income homeless families living in transitional shelters and engaged in CWU’s lightest touch program services: the rates of engagement in work or school increased from 45 to 80% of participants.

More than 40% of participating low-income homeless families had personal savings of at least $150. Just one year before, 0% of families had hit this benchmark.

Although some areas of the brain have age-related windows of opportunity, called critical periods, during which new neural networks can be built, but after which development becomes more difficult if not impossible, the prefrontal cortex remains responsive well into adulthood. Its plasticity enables it to continue, even in adulthood, to grow and strengthen new neural pathways that can support EF skills.

Although still early in its deployment, Mobility Mentoring® is producing impressive client outcomes. Formerly extremely low-income, marginally-educated families have moved out of subsidized housing into their own homes, attained college degrees and family –sustaining careers, saved thousands of dollars, and increased their measurements of well-being.