By the Urban Institute 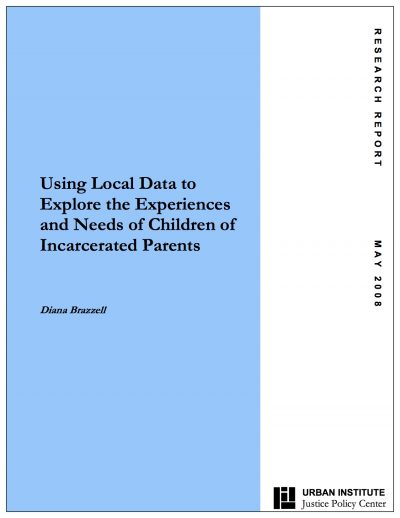 The Urban Institute received a grant from the Annie E. Casey Foundation to conduct exploratory research on the impact of parental incarceration and the experiences of affected children.

The purpose of the work was to learn more about the impact of parental incarceration as well as to explore the possibilities for using criminal justice and human services data to understand the population of affected children.

This report presents findings and lesson learned from the three sites. It begins with a discussion of the datasets obtained by each site and how they were linked, followed by a review of the analyses conducted and the sites’ findings on child of incarcerated parents in their jurisdictions. The report closes with a discussion of the possibilities and challenges involved in merging and analyzing administrative data on this population.

Analysis of families and children with incarcerated mothers

16% of mothers of children placed in foster care had a history of bookings in the jail between 2001 and 2004. These mothers had an average of eight bookings over the almost 20-year period covered by the data.

41% of incarcerated mothers came from the same four neighborhoods that represent only 22% of the city’s overall population. These neighborhoods were disproportionately affected by poverty and low levels of education.

In one-third of the cases, children were placed in foster care prior to their mother’s first arrest, while in two-thirds of cases they were placed after. On average, the mothers in the dataset were incarcerated twice before their children’s first placement.

One third of the children of women incarcerated in Illinois from 1990 to 2001 entered foster care at some point between 1976 and 2005, compared to less than 1% of all Illinois children.

The exact relationship between a mother’s arrest or jail history and her children’s placement in foster care is still unclear.

...the linking of state and local administrative datasets can provide valuable opportunities for exploring the experiences and needs of children with incarcerated parents, particularly incarcerated mothers.

This information can aid the efforts of researchers, policymakers and practitioners to better track, understand, and meet the needs of this vulnerable population.