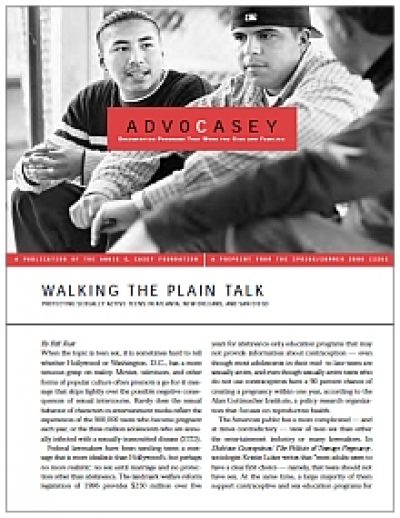 Teen sex carries consequences, not only in the form of unwanted pregnancies and sexually transmitted diseases, but those pregnancies lead to lower high school graduation rates and higher dependence on federal assistance. Plain Talk was a community-wide pregnancy-reduction initiative of the Annie E. Casey Foundation targeting low-income neighborhoods. This article published in 2000 presents several communities and their efforts to implement the Plain Talk plan.

The most successful sites gave decision-making authority to residents.

In 2000, the U.S. teen pregnancy rate was at least four times that of France, Germany and Japan.

Plain Talk's approach gave teens someone to talk to about sex and gave the community a safe way to discuss a taboo subject.

In Dubious Conceptions: The Politics of Teenage Pregnancy, sociologist Kristin Luker writes that “most adults seem to have a clear first choice — namely, that teens should not have sex. At the same time, a large majority of them support contraceptive and sex education programs for teens, a fact that suggests that they doubt that they will get their first choice.”

Some Plain Talk sites emphasized education, others focused on building communication skills. All of them tried to create a “safe space” where residents could informally ask questions and talk with other adults without fear or embarrassment.