Why are Young Children Missed So Often in the Census? 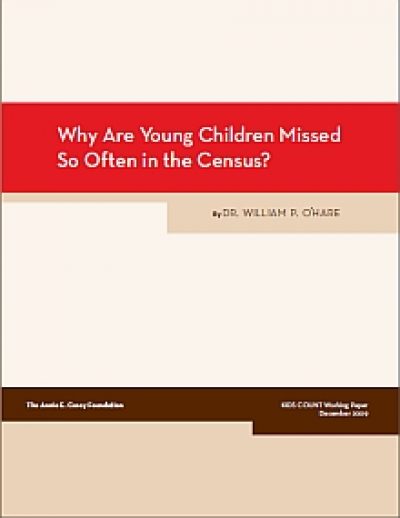 There is neither a simple explanation nor any consensus on why young children are missed so often in the census. But there are a couple of theories about why children might be missed. This report explores those theories, how it affects our political and economic structure, and offers recommendations to overcome the miscount.

When children are not counted accurately we don’t get a true picture of our nation.

Undercount in Every State

In almost every state, the undercount averaged 20% of children living in hard-to-count areas.

47% of unauthorized-immigrant households were couples with children.

Approximately 2 million children were affected by the housing crisis, which made it more difficult to get an accurate population count.

The census is at the heart of our political system. Census data are used to distribute more than $400 billion in federal funds each year,

Data from the 1990 census shows that undercounted children are disproportionately black, American Indian, and Hispanic, and all the evidence suggests they are likely to be poor.

Despite the long-standing problem of children being missed in the Decennial Census, little has been done to examine this issue.

At the local level, the more organiza¬tions such as Complete Count Committees, and Census Bureau partners can get informational materials to orga¬nizations and offices that reach households with young children, the more likely preschoolers are to be included in the census count.