Women and Men Living on the Edge

Economic Insecurity After the Great Recession 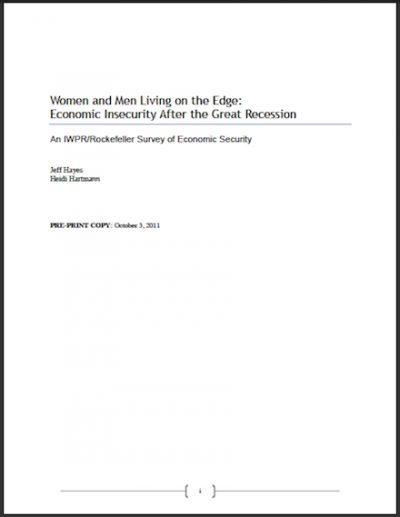 This report shares findings from the 2010 Survey of Economic Security. The survey, conducted by the Institute for Women’s Policy Research and the Rockefeller Foundation, tells how people felt about their own economic security following the Great Recession of 2007 to 2009. The results are far from rosy and indicate that, even after the recession’s official end, millions of Americans are financially frustrated, vulnerable and struggling.

The economic aftershocks of the Great Recession run broad and deep

This survey, conducted in fall 2010, compiles feedback from nearly 2,750 adults. Researchers packaged the results in various ways, including by gender, ethnic group, age and educational level.

In the year before the survey, 136 million adults said they cut back on household spending, 126 million cut back on vacation or entertainment, and 81 million failed to pay a bill on time.

Survey results reveal that 118 million Americans say they are having difficulties saving for the future.

Relative to men, women report greater struggles in meeting their children’s needs, putting food on the table and paying for bills and health care.

There was overwhelming support for maintaining Social Security benefits, ranging from a low of 73% among men who identify as independents to 93% of all female Democrats surveyed.

The results consistently point towards higher levels of economic stress for women and others who are marginalized in the labor market, including people of color, those with low levels of education, and single mothers.

Americans believe the government is and should be a lifeline, providing economic security in a turbulent economy.