Working Hard for the Money

By the Carsey Institute, University of New Hampshire 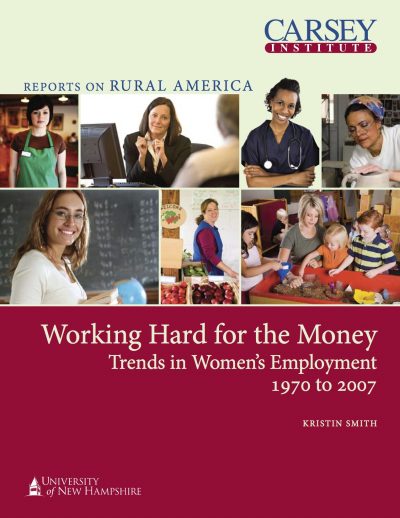 This report documents the changing nature of women and work nationally, and in rural and urban areas, concentrating on five big changes: 1) the increase in women's employment; 2) the recent "opting out" phenomenon; 3) the rise in women's earnings and declines in the earnings gap; 4) the rise in the working poor; and 5) the decline in the traditional family structure of a husband-breadwinner with a stay-at-home wife.

Given the decline in earnings among men and the low wages of women, rural poverty rates are higher than in urban areas overall, particularly among mothers with young children.

Today, nearly 1 in 5 rural married women contributes the majority of the couple's earnings, a 56% increase since 1970. Urban wives as primary providers increased by 65% over the same period.

Since 2000, the share of college-educated, married mothers of young children in the country's cities and suburbs who are working has declined from 75% to 71%. In 2007, 85% of equivalent rural mothers were in the workforce.

Many rural women today are working to add a second income to the family’s strained budget as the traditional male dominated fields like farming, mining, logging, and paper mills continue to disappear, replaced by a growing service economy.

Brain drain is a real issue for many rural areas, particularly in the Great Plains and Midwest. Without better paying jobs and more occupational diversity for female college graduates, stemming that drain will be even harder.