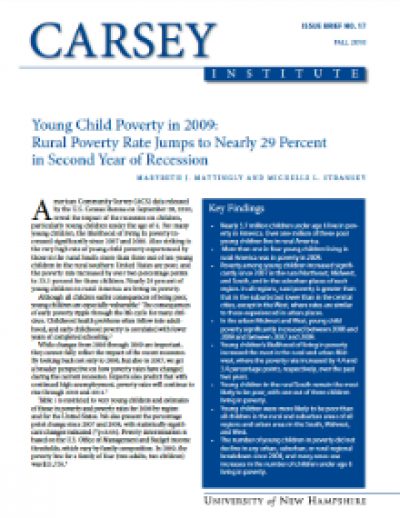 This report shows that the recession has had a significant impact on children, particularly those under age 6 and those living in rural America, where nearly 29% of kids are poor. Because the ripple effect of early poverty touches children throughout their lives, impacting health and education, this issue needs to be taken seriously by policymakers and other influencers to help break the cycle.

33.3% of young children in the rural South live in poverty--that's more than 1.7 million kids under age 6.

Although all children suffer consequences of being poor, young children are especially vulnerable. The consequences of early poverty ripple through the life cycle for many children. Childhood health problems often follow into adulthood, and early childhood poverty is correlated with fewer years of completed schooling.

Investing in children is an essential priority to ensure their long-term outcomes and the future success of the generation.