Youth Incarceration in the United States 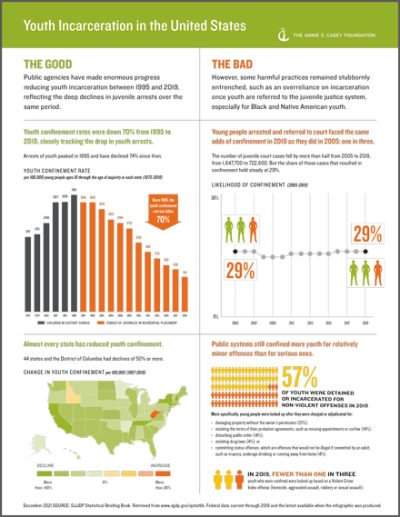 An infographic from the Annie E. Casey Foundation presents positive and negative trends in youth incarceration between 1995 and 2019 and recommendations for more effective responses than incarceration when young people break the law. It is based on federal data, which is current through 2019 and the latest available.

Juvenile justice agencies have made enormous progress by reducing youth incarceration 70% between 1995 and 2019, reflecting the deep declines in juvenile arrests over the same period. However, some harmful practices remained stubbornly entrenched in 2019, such as an overreliance on incarceration once youth were referred to the juvenile justice system, especially for Black and Native American youth.

The infographic disaggregates data by race and ethnicity because the large reduction in the overall number of young people behind bars obscures a sobering reality: Black youth are 16 times as likely to be in custody as their Asian and Pacific Islander peers, four times as likely as white peers and three times as likely as Hispanic peers.

The side-by-side format of the infographic identifies trends to celebrate as well as areas of concern. It concludes by addressing those concerns with recommendations for more effective responses than incarceration when young people break the law.

The infographic doesn’t include youth incarcerated in the adult criminal justice system. On a typical day in 2018, as per the latest federal data, 4,100 youth under age 18 were held in adult jails and prisons.

Our Youth Incarceration Infographic From 2013

Download the previous version of this publication from February 26, 2013

Public agencies have made enormous progress by reducing youth incarceration

Confinement separates young people from the support networks and guidance they need to thrive and grow into responsible adults.

The relatively small number of youth for whom confinement is justified need facilities that can provide a humane and developmentally appropriate setting in which their delinquent behavior can be treated effectively.