Youth Violence Myths and Realities: A Tale of Three Cities

By the National Council on Crime and Delinquency 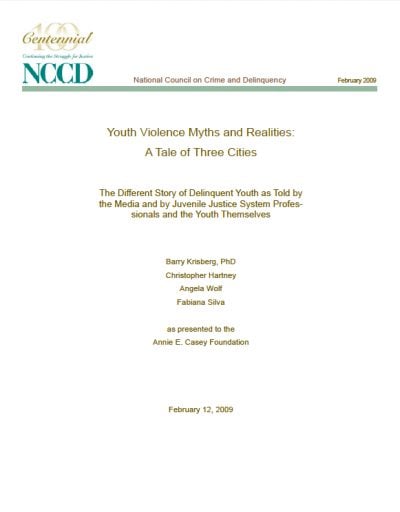 This report examines the youth perspective on violence, life circumstance, and the response of the justice system to a supposed growth of violence among troubled youth, based on studies in Dallas; Washington, D.C.; and San Mateo, California.

System reform requires the involvement of youth, families and communities

Three times as many people — 76% of adults surveyed — say that they get their information about crime from the media rather than personal experience.

Most adults surveyed — 65% — believed the best way to reduce crime was tackling social problems; 71% of 18 to 29 year-olds favored this approach. Whites were more likely to favor increasing police (34%) versus non-whites (14%).

These youth are not superpredators, they are not lost causes, but rather have made mistakes. But making mistakes is an integral part of growing up.

Stakeholders believe that once the community members understand the issues faced by these youth, and come into contact with them, they will be supportive of policies that promote rehabilitation and enhanced services.