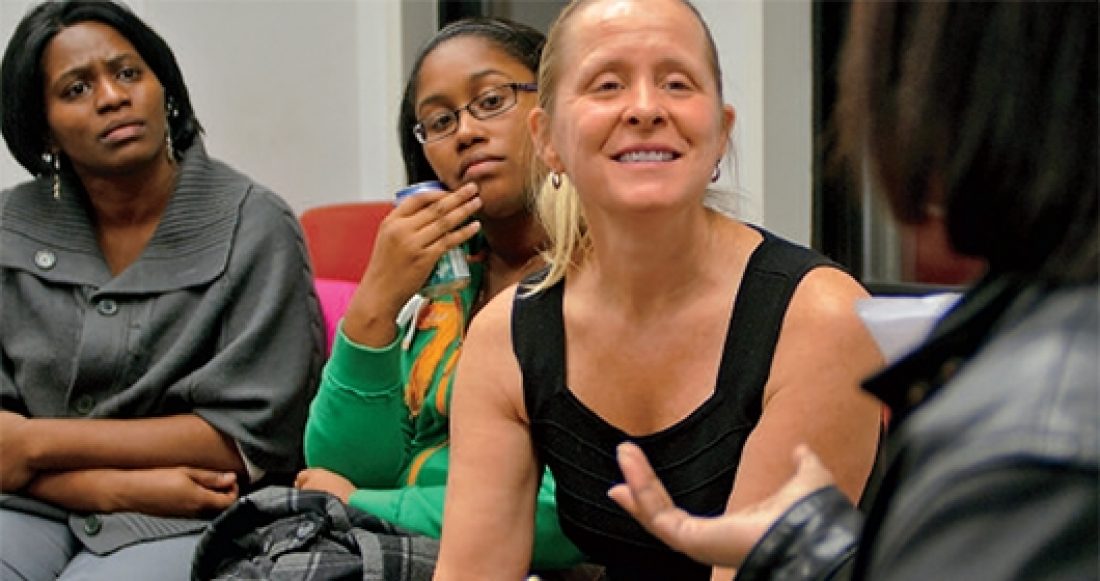 It wasn’t the first time 15-year-old Frank and his brother Joseph had gotten into a fight. But when it happened again in December 2008, Frank punched, kicked and held his mother Nancy’s head against the wall when she tried to intervene.*

Instead of having Frank placed in a juvenile facility, all parties agreed to offer Frank a referral to a program with proven results and life-altering opportunities. He was sentenced to 18-months probation and enrolled in “Blue Sky” — a program in New York City that provides intensive therapeutic treatment for troubled juveniles and their families. Two years later, Frank still lives at home, is in school, works part-time and no longer exhibits aggressive behavior. His mother and brother also have received treatment to address mental health and substance abuse issues.

The Annie E. Casey Foundation wants to promote greater use of evidence-based practice — treatment approaches such as Blue Sky’s that are rigorously studied and tested to ensure proven results.

Now in its fourth year, Blue Sky has a nearly 60% success rate in preventing the young people it serves from being removed from their homes. Since its 2007 launch in Manhattan and the Bronx, Blue Sky has helped some 350 youths referred by New York City Family Court to safely avert placement in residential facilities. Blue Sky costs roughly $17,000 per youth—including services to the entire family — which translates into about $100,000 in annual savings for each youth kept in the community and out of incarceration. Studies also show that the therapies Blue Sky uses save money and lives by reducing recidivism, hospital stays and suicide rates.

Despite compelling evidence that this approach works, however, many young people in similar circumstances to Frank’s are placed in facilities that, in the long run, leave them no better off than when they arrived.

“Juvenile offenders are sent to institutions with the hope that removing them from their precarious situation will help, yet when the youth are released, they return to the same environment in which they first committed their crimes. Many fall prey to the same temptations, commit another crime and remain entrenched in the juvenile justice system,” notes the website of the nonprofit that pioneered Blue Sky, New York Foundling.

Scott Henggeler, principal researcher in an ongoing evaluation of Blue Sky, says evidence-based programs are used in only about 5% of juvenile justice cases nationally and are concentrated in a few states. Henggeler is based at the Medical University of South Carolina Family Services Research Center, in the department of psychiatry and behavioral sciences.

The Casey Foundation is working to ensure that evidence-based practice (also known as EBP) is more widely used not only in juvenile justice, but throughout the entire child welfare field.

Since the 1980s, public and private investments in research and programs aimed at preventing poor outcomes for vulnerable children have identified factors that can help protect them and make them more resilient, such as strong families and communities and support services that build on their strengths.

In addition, it’s now possible to identify highly effective efforts that can cut rates of drug use, school dropout, and other adolescent risks, thanks to rigorous evaluations. But despite a legacy of poor long-term outcomes for young people placed in restrictive institutional settings and massive expenditures of taxpayer dollars, evidence-based alternatives like Blue Sky aren’t widely embraced.

Casey is working to develop tools to help and encourage public systems to fund their own evidence-based programs and to help replicate successful efforts. Some of the tools the Foundation’s EBP group is working on include:

While these tools are still under development, the Casey team has formed partnerships to help advance evidence-based practice. For example, the team is working with the Jim Casey Youth Opportunities Initiative — which provides support to ease young people’s transition out of foster care — and the developers of Communities That Care, an evidence-based community change initiative developed by the Social Development Research Group at the University of Washington in Seattle.

New York Foundling, created in 1869 as a home for abandoned children, now has a diverse network of programs serving families with multiple needs. It received Casey support to develop Blue Sky, working with the developers of the three evidence-based treatments it provides. Blue Sky’s services are funded with federal, state and local prevention dollars.

Blue Sky got its start after New York Foundling began working with the Administration for Children’s Services on an initiative to reduce the number of New York City youth being placed in upstate facilities operated by the State Office of Children and Family Services. The initiative, which came to be known as Blue Sky, provides a continuum of care for high-risk youth, serving some 60 families at a time for four to six months on average. It combines three treatment models: Multisystemic Therapy (MST), Functional Family Therapy (FFT) and Multidimensional Treatment Foster Care (MTFC).

“The notion was that the intensity of services could range from outpatient services once or twice a week to a more intensive home-based model to a short-term specialized foster care approach aimed at stabilizing serious anti-social behavior before returning the youth to the family,” says Henggeler. Each treatment has advantages for specific youth and families, who can move from one to another seamlessly depending on their needs.

One reason Blue Sky is so effective is because of what EBP researchers call “fidelity” — practicing each of the therapies according to specific guidelines — notes Sylvia Rowlands, assistant executive director of the New York Foundling and director of Blue Sky. “We follow the models with adherence. There is a lot of communication between and across the three treatment models, with everyone involved doing whatever it takes” to address any challenges the family is facing, she says.

Casey’s support of Blue Sky has “had an enormous impact on the field in New York City,” adds Rowlands. “In partnership with the Department of Probation, we have been able to help influence how judges make orders, how they allow clinicians to do the clinical work and their patience in allowing these family systems to change.”

One example is Communities That Care, the Seattle initiative that has successfully helped community advocates raise local funding and work with public agencies to implement effective prevention programs.

“Supporting EBP is well overdue in the field — and critical in getting better outcomes for kids,” says Henggeler. “Too often, people keep doing what they learned in graduate school with little regard for how it works. Casey is trying to set the stage for wider dissemination of innovative approaches that actually work.”

* not her real name