For the first time since the start of the Great Recession, the U.S. child poverty rate did not increase, holding steady at 23% (16.4 million children), according to the 2012 American Community Survey. Thirty-eight states and the District of Columbia saw their child poverty rate stay the same or decrease between 2011 and 2012 — a positive trend, although most states' rates are still considerably above pre-recession levels. At 40%, African-American children are three times as likely to live in households with incomes below the poverty line as their white counterparts, of whom 14% live in poverty. American Indian (37%) and Latino (34%) children are twice as likely as white children to live in poverty. 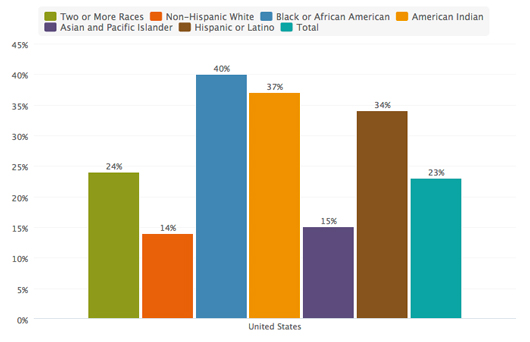