Fewer Children in Poverty, But Still Cause for Concern

For the first time since the great recession, the child poverty rate has declined. According to data from the U.S. Census Bureau’s American Community Survey, 22% of kids, or 16 million children, lived in poverty in 2013, a number equal to the child populations of Texas and California combined.

Of these children, 14% live in areas of concentrated poverty — neighborhoods where residents are more likely to experience high rates of crime and violence, physical and mental health issues, unemployment and other issues related to having limited resources. In Mississippi, 27% of children lived in such high-poverty areas, compared with 1% in Vermont. 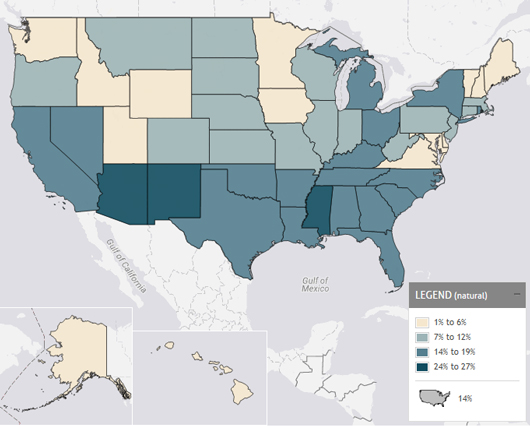 Explore new Poverty data available for the nation, states and the largest 50 cities in the KIDS COUNT Data Center: