Compared to Their Classmates, Kids of Color More Likely to Be Removed by Schools 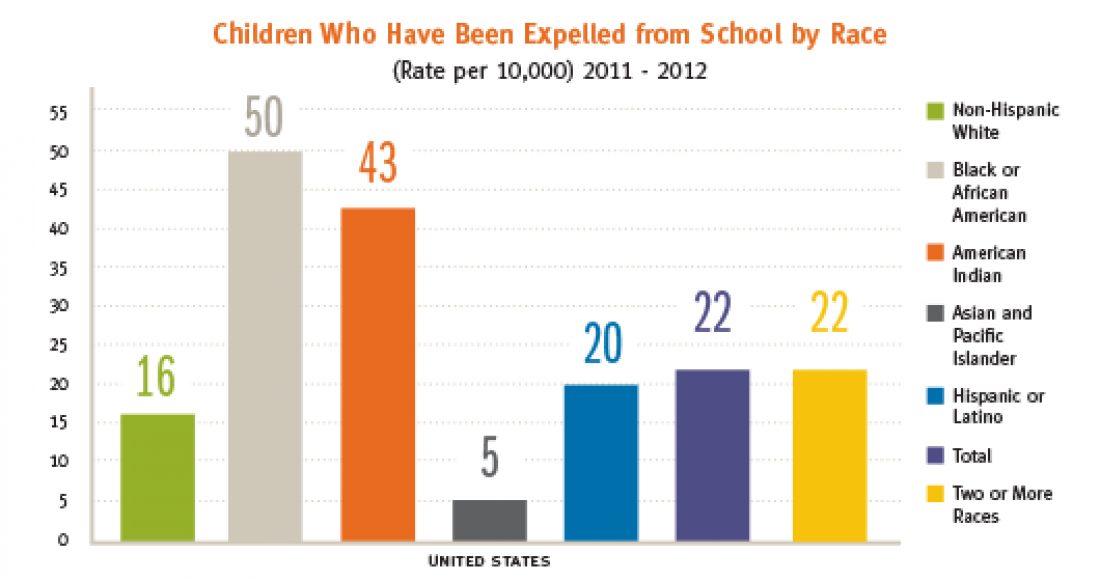 Black and Amer­i­can Indi­an kids are more like­ly — and in some instances much more like­ly — to be sus­pend­ed and expelled from pub­lic school com­pared to their white, Lati­no and Asian classmates.

Stu­dents who are removed from school can quick­ly fall behind and strug­gle aca­d­e­m­i­cal­ly when and if they return to class, accord­ing to research.

Across the coun­try, out-of-school sus­pen­sion rates are high­est for black stu­dents at 15%. In com­par­i­son, just 2% of Asian stu­dents, 4% of white stu­dents, and 6% of Lati­no stu­dents are sus­pend­ed from pub­lic school.

The racial dis­par­i­ties deep­en for data on expul­sion rates. Black and Amer­i­can Indi­an kids are 10 times more like­ly than their Asian coun­ter­parts to be expelled from pub­lic school. These stu­dents are also expelled at twice the rate of their Lati­no class­mates and 3 times the rate of white stu­dents, accord­ing to data from the U.S. Depart­ment of Education’s Civ­il Rights Data Collection.

Learn more about sus­pen­sion and expul­sion rates in your state on the KIDS COUNT Data Center.

Casey has made a small change to its KIDS COUNT Data Center—and it’s a big deal.

The Data Center is home to a new search category—search by characteristic—in addition to allowing users to sift through data by location and topic. As part of this update, visitors will instantly connect to a game-changing 44 race-related markers for evaluating child and family well-being. This category also includes statistics grouped by age and family nativity.