Looking Through the Lens at East Baltimore’s Progress 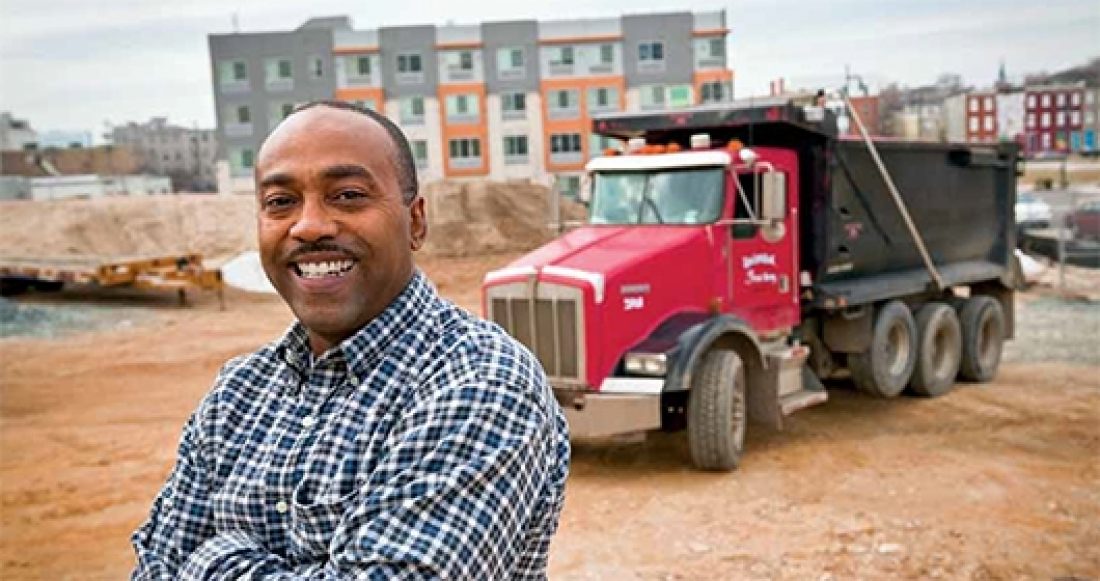 “By me growing up in East Baltimore, I know a lot of the history and where this neighborhood has come from,” says Parrish, chief executive officer of Unlimited Trucking, whose fleet of vehicles is helping to drive progress. “If you look now, I see the potential. I’m buying into it, and I’m trying to be part of it.”

Parrish points to a construction truck parked between two just like it. “That guy driving that truck over there, he lives next to my parents in East Baltimore, so to see people get involved who normally aren’t involved in a project is a good thing.”

Parrish is speaking into a video camera as he guides visitors through this community in the shadows of the Johns Hopkins Institutions where he grew up — and which he is helping to rebuild. His tour is one of several online videos that are part of a series called “The Real East Baltimore,” filmed by East Baltimore Development Inc. to highlight progress on the path toward responsible redevelopment.

The videos escort viewers on a virtual tour of bustling construction sites, green and healthy homes, job fairs, employment training, a school ribbon-cutting and other images that evoke steady improvements in the local landscape. The voices of people participating in these efforts also signal a revival of resident engagement and enthusiasm in a community that enjoyed a glorious era until a series of setbacks in the last few decades of the 20th century sent it spiraling into decline. 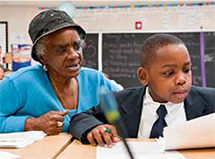 East Baltimore Development Inc. (EDBI) was established in 2003 to reverse this trend and transform 88 acres, marshaling $1.8 billion in new investments to develop a thriving mixed-use community for families of all income levels to live, work and grow. The project has brought together the city of Baltimore, state of Maryland, the Johns Hopkins Institutions, the Annie E. Casey Foundation, residents, many local businesses, philanthropies and other interests.

EBDI represents the Casey Foundation’s largest investment in Baltimore, one of two cities, along with Atlanta, that the Foundation calls civic sites. In addition to developing new housing, business and job opportunities, EBDI is paving the way to help children in this community prepare for success through construction of a new $43 million 90,000-squarefoot elementary school and 28,000-square-foot early childhood center, which together will serve 720 children.

The new Henderson-Hopkins school will replace the East Baltimore Community School, now housed in temporary quarters on North Wolfe Street. The Henderson-Hopkins school and the new Harry and Jeanette Weinberg Early Childhood Center, expected to open in August 2013, will be operated by the Johns Hopkins School of Education in partnership with Morgan State University’s School of Education and Urban Studies. The complex will serve as a hub for community engagement, offering wide-ranging activities and services for children, families and residents in collaboration with many local institutions.

In one video, lifelong East Baltimore resident Betty Carlos reminisced about a K–2 school that opened 40 years ago where the East Baltimore Community School’s kindergarten is now housed. 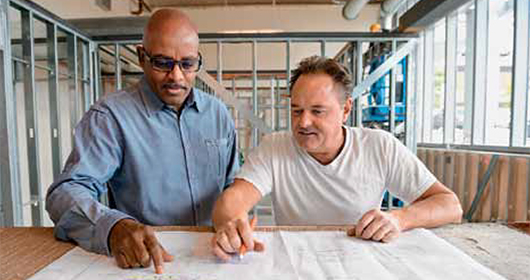 In the “Real East Baltimore” videos, stories like this show how changes in the community are altering the life trajectories of residents as well.

There’s the story of a former prison guard who went into social services to prevent residents in his community from getting involved in criminal activity. “Now, as I help individuals gain employment and other service needs, it gives me great joy in the community in which I come from,” says Darryl Alford.

Timothy Veal, a former drug dealer, describes how he turned his life around and got help from EBDI in getting a job, a high school degree, a driver’s license and even buying a home. He gradually worked his way up to a supervisory position as environmental services crew chief.

In another video, Edward Williams, an East Baltimore resident who grew up on Chase Street 60 years ago, guides visitors though the neighborhood’s history. “This was a lovely place; it was just beautiful,” says Williams. He describes the highs and lows of life in East Baltimore, and then points to the Ashland Commons Apartments with its 78 mixed-income units, the Park View at Ashland Terrace with 74 mixed-income units for seniors and the Chapel Green Apartments.

“Residents have moved back into here,” he says, taking special note of marble steps that have defined the section East Baltimore called Middle East. “This was once torn down. Now you see the progress we have made.”

Besides providing business opportunities for entrepreneurs such as Parrish, the project has attracted African-American-owned businesses such as the Verde Group and Kayden
Enterprises, which have demonstrated a commitment to hiring minorities, especially neighborhood residents.

“Economic inclusion and workforce development are a top priority,” Cheryl Washington, senior director of human and community services, says in another video. EBDI projects have a contractual requirement for residents and for minority- and women-owned businesses to get first priority for contracting opportunities.

The project is attracting African-American entrepreneurs such as Mondel Powell, another believer in the renaissance. Planning for an opening of his restaurant, Teavolve, in the John G. Rangos Sr. Building on North Wolfe Street, between Madison Street and Ashland Avenue, Powell says in an interview with Casey Connects, “I love seeing the cranes in the air.”

“The new Johns Hopkins graduate student housing is across the street in the next block, and just down the street a health lab is underway,” he adds. “There is a new parking garage for 1,200 cars, and next year, a 300-bed hotel will go up across the street from us. And when everything is done, this will be a vibrant community.”