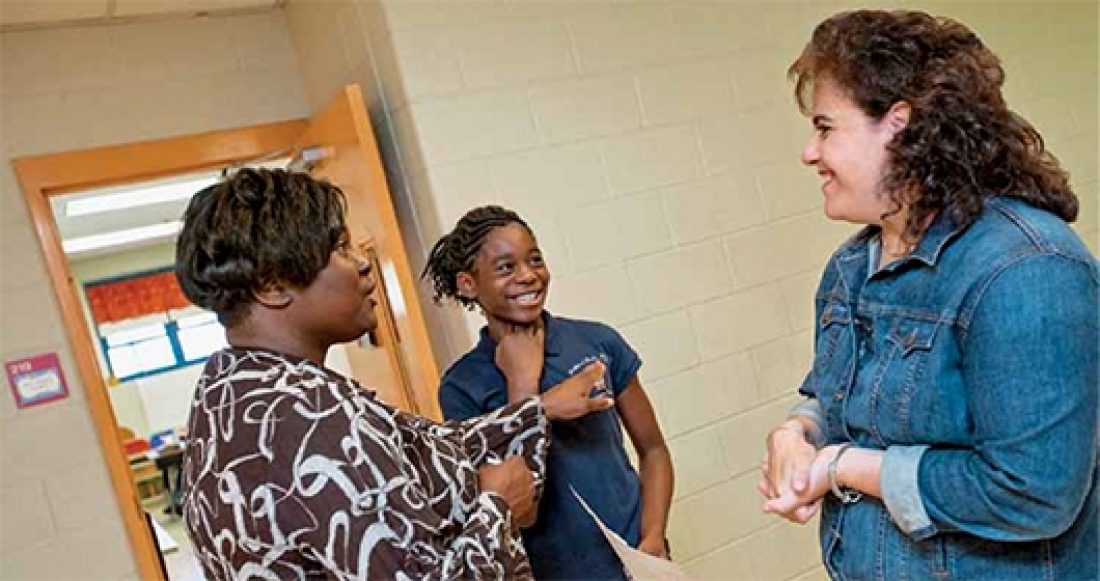 Even in mid-July, the Robert L. Bailey, IV Elementary School in Providence is abuzz with activity as 120 children populate a summer program run jointly with the YMCA to help prepare preschoolers for school, boost academic performance and prevent children from losing ground over the summer.

In one classroom, parents who are not native English speakers are learning the meaning and pronunciation of vocabulary words and synonyms. “Now, I can help my daughter with her spelling tests and check her work, and she is happy when I come to class to talk to her teacher,” says Nelly Alvarez.

At the Brookfield Elementary School in Oakland, California, children in kindergarten to second grade who would otherwise struggle to stay afloat are reaping gains in literacy and reading through Super Stars Literacy — a nonprofit founded 10 years ago by the Junior League of Oakland-East Bay that provides lively after-school sessions and one-on-one tutoring by Ameri-Corps members.

What do Oakland and Providence have in common? Both cities have a long history of mobilizing formidable coalitions to strengthen families and improve outcomes for vulnerable children, in part stemming from their involvement in the Casey Foundation’s Making Connections initiative. And both are part of a national network dedicated to ensuring that all children, whatever obstacles they face, read on grade level by the end of the third grade.

Every year, 68% of America’s children, and more than 80% of children from low-income families, miss this critical milestone. Because third grade is the pivotal year when children should shift from learning to read to reading to learn, failing to read proficiently at this juncture greatly increases the odds of failing to complete high school and succeed in a career. Research shows that children from low-income families not reading at grade level by the end of third grade are up to 13 times less likely to graduate from high school on time, compared with their more affluent peers.

The Campaign for Grade-Level Reading, launched with Casey leadership in 2010, is a collaborative effort by funders, nonprofit partners, states and communities across the nation committed to:

The network — representing 34 states, the District of Columbia, Puerto Rico, the U.S. Virgin Islands, 350 school districts and more than 8 million school children — was launched at a Denver gathering to announce recipients of the National Civic League’s annual All-America City Award. The league teamed up with the Campaign for Grade-Level Reading, the National League of Cities and United Way Worldwide to make grade-level reading the focus of its 2012 awards. They honored 14 sites with the most robust Community Solutions Action Plans to tackle early literacy. Providence was one of them. But all the communities that applied are reaping benefits from the technical support, information and access to experts that the network provides.

Coming Together in Oakland

The Oakland Literacy Coalition is a network of literacy service providers, foundations, businesses and city and school district officials convened by the Rogers Family Foundation in 2008. The coalition partnered with Mayor Jean Quan’s Office to garner widespread support in developing Oakland Reads 2020, an early literacy campaign the city launched to pursue the goals of the national campaign.

The Grade-Level Reading Campaign “has had a tremendous impact on us and helped us galvanize a range of players from the mayor to government agencies and community organizations,” says Cassie Perham, director of literacy grants at the Rogers Family Foundation. “It encouraged us to put a stake in the ground and set a goal to ensure that 85% of our third graders are reading proficiently in 2020,” up from 42% in 2011. Currently, only 33% of children from low-income families read proficiently. “It’s not about winning an award but about how we as a community can come together to meet this goal.”

Brookfield is one of 10 East Bay schools served by the Super Stars Literacy program, which coaches AmeriCorps members and other community volunteers to inundate underperforming children from kindergarten through second grade with tutoring during and after school. Some 60% to 80% of participants accelerate their reading progress by at least one grade level each year. The program also works with parents and takes them on educational field trips with their children.

Oakland Reads 2020 “has broken down some silos that had existed among literacy providers and related organizations in the past, and we’re learning quite a bit from each other,” says Mike Mowery, executive director of Super Stars Literacy.

Providence had a solid base to compete for the All-America City Award, with a strong focus on early literacy stemming from Making Connections. Rhode Island also has federal Race to the Top and Race to the Top-Early Learning Challenge grants, and Providence was the first city selected in Casey’s Evidence2Success initiative, which promotes programs proven by research to foster children’s healthy development.

Mayor Angel Taveras, the city’s first Latino mayor and a graduate of Head Start as well as Harvard University and Georgetown Law School, is a vice chair for grade-level reading for the U.S. Conference of Mayors. His office heads Providence Reads, an effort backed by the Mayor’s Children and Youth Cabinet. It has a 25-member Grade-Level Reading Working Group representing 19 agencies.

“It is really important to me that we are successful in educating our kids, because I see the children in our schools and they remind me of what a lifeline education was for me,” says Taveras, who was encouraged by a school teacher to pursue his dream to become a lawyer. He wrote a book called How to Do Well in School, which he reads to children at libraries and schools. Libraries play a key role in Providence Reads, offering free after-school and summer activities to stimulate reading.

The city’s efforts are also supplemented by federal funding for full-service community schools and nonprofit programs like Inspiring Minds, which helps bridge the performance gap between low-income children and their peers through tutoring, kindergarten preparation and programs for parents.

Only half of Providence’s children enter school with preschool experience. However, Rhode Island recently adopted a new school funding formula that includes pre-K, and a 10-year plan to boost slots is underway. Through its Early Learning Challenge grant, the state is also expanding its five-star quality child care rating system that challenges child care programs to meet a set of quality standards.

“Our goal is to have all programs involved in the rating system in 2013,” says Leslie Gell, director of Ready to Learn Providence, a nonprofit that helps child care providers get expanded training. She also cochairs the city’s Grade-Level Reading Working Group with Elizabeth Burke Bryant, executive director of Rhode Island KIDS COUNT.

Chronic absence is another barrier. In 2011–2012, 32 percent of Providence kindergartners missed at least 10% of the school year, and 26% of children from kindergarten through third grade were chronically absent. The Providence Children’s Initiative, launched in 2010 by Family Service of R.I., followed up with the parents of some chronically absent children at Mary E. Fogarty Elementary School. They found issues ranging from a lack of safe transportation to parents working the third shift and being too tired to wake their children.

Through solutions like getting volunteers to help walk children Casey connects 15 to school or the nearest bus stop and offering child care as early as 6:30 a.m., the initiative improved school attendance for the 50 families involved. Work is also underway to address environmental hazards in homes and schools that affect children’s health. “Without the data, you can’t take the next step of informing what the practice will be,” says Michelle Cortés-Harkins, director of the Providence Children’s Initiative.

Dana Gist Williams shifted her 10-year-old daughter Marissa Benton to Bailey from another school she felt was dangerous, and the services at Bailey have helped her and her daughter survive tough times. “They follow the children from grade to grade, and the team relays information to the next teacher” to provide the right academic and support services, says Williams, who has joined a new parent-teacher organization at the school. “The parents who come to the PTO are very happy, because they treat them with respect and have the educational programs children need.”