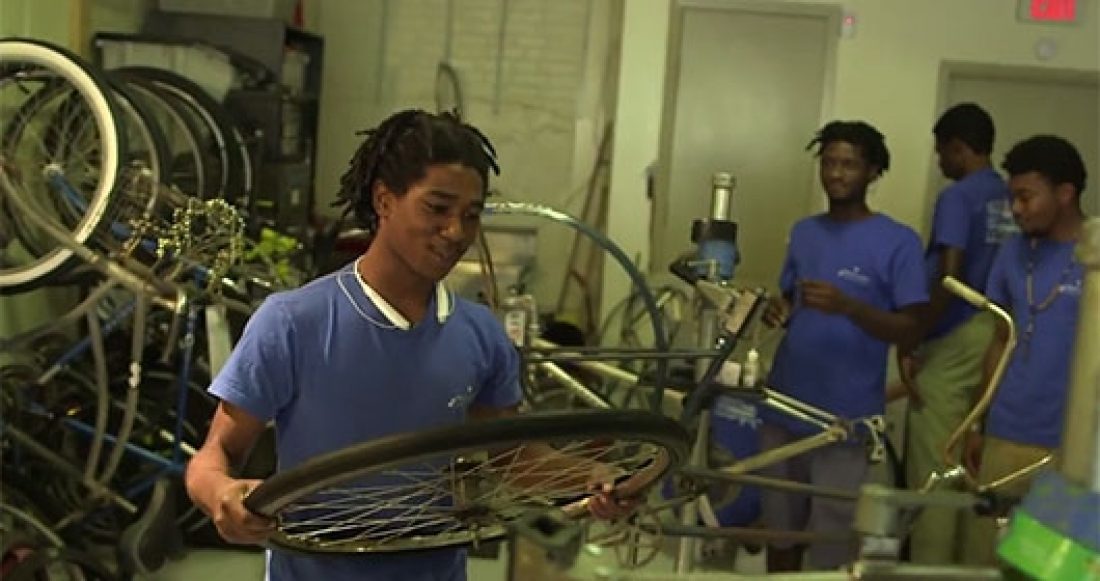 There are 60,000 young people incarcerated in the United States on the order of a juvenile court and nearly half are held in long-term correctional facilities. There’s compelling evidence that locking up low-risk youth offenders doesn’t reduce further offenses; wastes taxpayer dollars; and exposes young people to high levels of violence and abuse.

The so-called "school-to-prison pipeline" is a widespread pattern around the country of pushing students, especially those who are already at disadvantage, out of school and into the criminal justice system. New Orleans cannot yet be held up as a success story in reforming a retributive system of punishment into a rehabilitative one, but we did find some groups that were doing effective, even inspiring work in trying to turn the situation around.

Parents and social workers created Friends and Families of Louisiana’s Incarcerated Children (FFLIC) in response to horrifying stories of abuse and neglect in the state’s secure-care facilities. Gina Womack co-founded the group in 2000: “There wasn’t anyone helping families whose children had been caught up in the prison system, often for the most minor offenses—and then it can destroy their lives.” She described one child who was arrested for stealing a Pepsi and a hot pocket “because he was hungry. And the story owner pressed charges and he found himself in Tallulah, the worst prison at the time.” FFLIC was ultimately instrumental in getting that prison closed.

The goal of the FFLIC is to help give parents a voice when their children are expelled from school or incarcerated and, ultimately, to help change the practices and culture in these facilities so they no longer mimic the adult prison system and instead provide a nurturing and rehabilitative environment. Through FFLIC we heard about the story of the young man, Joseph, who was jailed for fifteen days for violating probation after getting into a fistfight at school. At a FFLIC meeting of concerned parents we met Charmaine Washington, whose two nephews were casualties of the school-to-prison pipeline: Myles, featured in the video, and Darius, who spent eight years in detention by the time he was twenty, only to die of gunshot wounds after his release.

The other challenge in reforming the system is helping youth readjust to society after they’re released from incarceration. We found the Youth Empowerment Project (YEP) is doing effective work with recently released juvenile offenders in New Orleans, providing intensive, individualized case management and support. They have programs that teach youth, such as Ja’leel Holmes, featured in the video, job skills like bicycle repair and restaurant work, and help them reintegrate. As Ja’Leel told us, “Often we can’t get hired because we don’t have experience working,” after spending formative years behind bars. “After going through YEP you get skills you need but also something we can put on our resume and there’s something there for somebody to look at when we fill out a job application.”

YEP’s Community Reintegration Program is the first of its kind in Louisiana. They make a conscious effort to hire staff that reflect the population they serve. Each CRP team is made up of a senior mentor and two youth advocates, all of whom grew up in situations very similar to those faced by the kids they’re helping. They have face-to-face contact with youth three to five times per week at home, at school and in the community. The advocates also speak regularly with the youths’ teachers, guardians and parole officers. An external evaluation conducted in 2011 found that 91% of the young people who’d been through YEP’s program had remained outside the justice system.

This blog post and accompanying video were produced by Starfish Media Group and journalist Soledad O'Brien.