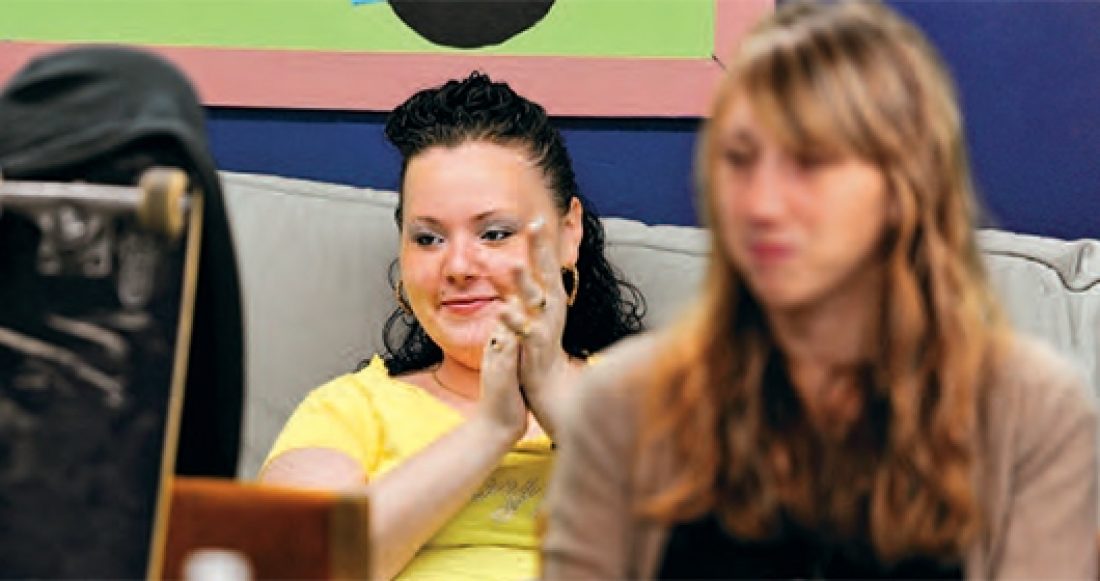 “They helped teach us the difference between love and lust, what the difference is when you really love somebody, and how you want to see each other happy and achieving your goals,” says Stewart, who gathered the strength to let go of a relationship that had become too aggressive.

The program also motivated Menjares to move on from a dead-end relationship. “It helps you with relationships with partners and other people in your life,” he says. “I speak to people in authority differently now, and I have learned to cope better with people I don’t like.”

When the Annie E. Casey Foundation was looking for settings to implement a curriculum for promoting healthy relationships, it reached out to YouthBuild USA, a youth and community development program with 283 sites in communities across the country. YouthBuild helps low-income young people ages 16 to 24 work toward their GED or high school diploma while learning job skills by building affordable housing. About 50 to 60 percent of participants are single parents or at risk of early teen pregnancy.

With Casey support, a curriculum called “Love Notes,” developed by Marline Pearson, was piloted in 10 YouthBuild sites nationwide. Helping to steer young adults away from unhealthy relationships before they get married or become parents is part of a broader Foundation effort to improve outcomes for vulnerable children by strengthening the positive bonds between their biological parents.

When the George W. Bush administration first established the National Healthy Marriage resource Center in 2004, Casey was the first foundation to lend financial support. But under the leadership of Casey Senior Associate Carole Thompson, the Foundation sought to expand the focus beyond marriage to the building and maintaining of healthy relationships.

Recognizing the “heroic” roles single parents play in low-income communities, the prevalence of domestic violence, and the need to help prevent teenage pregnancy, “we wanted to tip the focus so it could emphasize healthy relationships, not just healthy marriage,” says Thompson. “Whether parents marry or not, there is a bond and responsibility for the joint welfare of their child.”

“We could get them to pass a GED, get a high school diploma, or place into a college course, but it was the interpersonal skills when they got out” that impeded them, he says. “We saw the number of young people completing the program improve and the number moving on to successful job placement improve” as they developed stronger relationship skills. Another benefit was “a decrease in misogynistic and homophobic language and a greater appreciation for each other.”

“The evaluation showed that this program increased not only the knowledge but the behaviors of young people about when to start sexual relationships and how to get out of one,” notes Michelle Quinn-Davidson, director of the Academy for Transformation at YouthBuild USA. “They also developed more positive relationships with their own parents and improved their parenting skills.”

The Foundation also provided funding for a relationship program called “Within My Reach,” piloted in eight sites by the National Crittenton Foundation for two years. The Portland, Oregon-based national organization has 26 member agencies that serve young women involved in the juvenile justice and child welfare systems, including many who are pregnant or have children. “We wanted to embed this into a national program for teen mothers to make it part of a two-generation strategy,” notes Thompson.

Shaniqua Smith, a participant in a Crittenton site in Manhattan who recently had a baby boy, thinks she wouldn’t still be in a relationship with the baby’s father without the program. “We were on the rocks bad. We were going through a lot of arguing, and it taught me how to listen more and not cut him off every time to get my point across,” says Smith. “We are getting along a lot better as result.”

Jessie Domingo Salu, director of programs and communications of the National Crittenton Foundation, says participants have learned “how to make better decisions for themselves and their kids and be aware of relationships they are in and whether they are potentially waving red flags.”

Although Casey’s funding has ended, “most of the agencies are going to continue to implement it, and we’ll keep working with them to fine-tune it and update it,” says Jeannette Pai-Espinosa, Crittenton’s president.

When President Clinton signed into law the Personal Responsibility and Work Opportunity Reconciliation Act of 1996 (better known as welfare reform), it included provisions for marriage strengthening and incentives for states to reduce teenage pregnancy. Under the leadership of Wade Horn, assistant secretary for children and families under the Bush administration, the government launched a National Healthy Marriage Initiative in 2002 and later awarded grants to 226 organizations to promote healthy marriage and responsible fatherhood under the Deficit Reduction Act of 2005.

The federal government also provided funding for eight sites to participate in Building Strong Families, an effort to study the effectiveness of providing relationship skills education and other support services to unwed couples who are expecting a child or have just had a baby. The Casey Foundation provided additional assistance to the Center for Urban Families from 2005 to 2010 to help it recruit families and provide services for the Baltimore site.

The first phase of an evaluation by Mathematica Policy Research showed that the program did not achieve its “primary objective of improving the stability and quality of the couples’ relationships.”

Programs in six sites generally had little or no effect on relationships as compared to a control group. But a program in Oklahoma City had a consistent pattern of positive effects on relationship outcomes, while the one in Baltimore had a number of negative effects. Baltimore participants were significantly more economically disadvantaged than those in other sites.

“For me, a gap in the early strategy was that it didn’t recognize the challenges of urban low-income couples,” says Joseph Jones, president and chief executive officer of the Center for Urban Families. “The lessons we learned helped us to redouble our efforts to provide a blend of services that deal with relationship skill-building and economic circumstances.”

As a result, the Center for Urban Families received federal funding for Couples Advancing Together, which infuses topics like financial education, budgeting, child care management, and family planning into relationship building. “If you don’t address all of these things together, you are limited,” notes Jones. “Stress related to finances can kill almost any relationship.”

Couples Advancing Together participants Ravon Davis, 24, and Denise Andrews, 21, say they are working on their workforce goals and waiting until they are more secure financially to marry. But thanks to the relationship skills they’ve learned, they are planning a future together with their infant son.

Without this support, the couple says they wouldn’t have lasted five years and be living together.

“Both of us grew up without fathers,” notes Davis. “We already know what it’s like firsthand to not have your parents together.” Adds Andrews: “Our parents hated each other, and we wanted our child to have a totally different experience.”