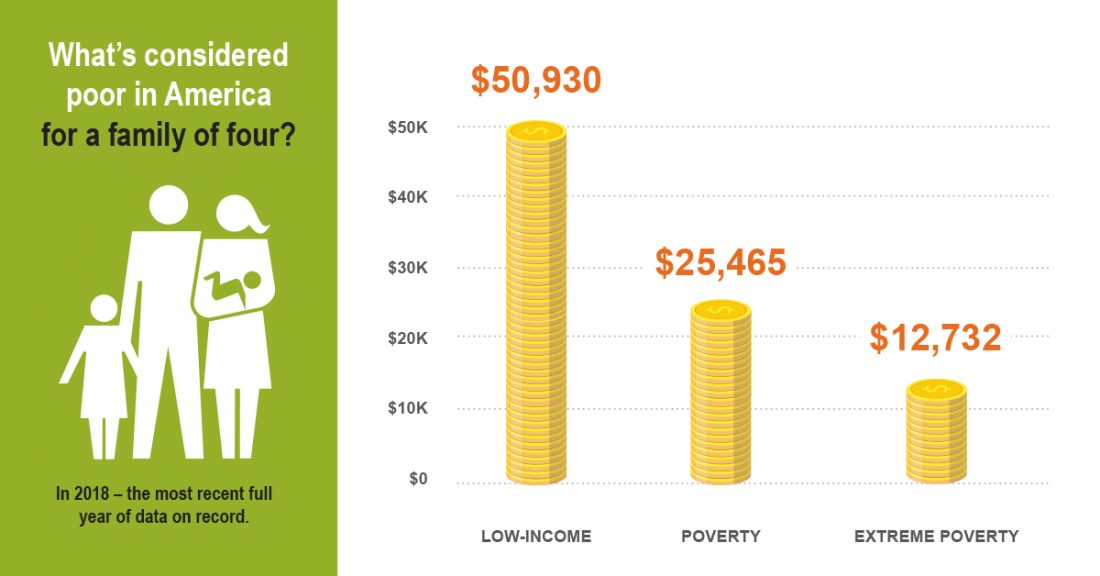 Experts talk about poverty in various ways. This post explains some of the most common terms used to describe poverty in the United States today.

In 2018, 13% of Americans — 42 million people — lived in poverty according to the official definition of poverty. This measure estimates an 18% child poverty rate, translating to 13 million kids living in poverty in 2018.

That same year, 13% of Americans — about 42.5 million people — lived in poverty according to supplemental poverty measure. This calculation estimates a 15% child poverty rate, translating to about 10.7 million kids living in poverty in 2018.

The U.S. Department of Health and Human services uses the official poverty measure to determine eligibility for government programs.

Income thresholds for this measure are calculated by tripling the inflation-adjusted cost of the minimum food budget in 1963 and amending for family size and composition. A family or an individual is considered poor if their household earnings fall below their prescribed annual income threshold.

Developed in 2010, the supplemental poverty measure offers a more statistically complex estimate of poverty and speaks to how government safety net programs are impacting poverty rates.

Income thresholds for this measure extend beyond food costs and consider the costs of basic goods and necessities, such as clothing and shelter. Thresholds vary by location and housing arrangements and can expand the family unit to include non-related members who share household resources.

Degrees and Types of Poverty

Families live in extreme poverty when their household earnings amount to less than half of their assigned poverty threshold. Also written as “below 50% poverty,” this designation applied to 17.3 million Americans in 2018.

In 2018, some thresholds for extreme poverty were:

To meet their most basic needs, families need to earn about twice as much as the federal poverty threshold, according to research. Families with annual earnings below this level — $50,930 for a family of four with two children in 2018 — are considered low income.

The most recent data on record indicate that 8.5 million children — 12% of kids nationwide — lived in areas of concentrated poverty from 2013 to 2017, according to the KIDS COUNT Data Center.