Parent-turned-advocate Tarsha Jackson received the Annie E. Casey Foundation’s Natalie S. Bimel Award for her efforts to ensure the inclusion of families in detention reform efforts. Jackson, the coordinator of Texas Families of Incarcerated Youth, received the honor in Houston during JDAI’s 2012 Intersite Conference in April. 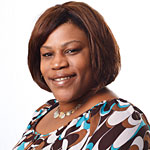 The award is named for Natalie S. Bimel and honors the contributions of community leaders to detention reform. Bimel directed the JDAI documentary “These Are Our Kids,” completed shortly before her death from cancer in 2002. The criminal justice reformer also established a number of highly regarded community programs to reduce the reliance on incarceration and help former prisoners transition successfully back to their communities.

Jackson received the award as affirmation of her years-long campaign to raise the prominence of families’ voices in advancing juvenile justice reforms. Her involvement was spurred by her experiences navigating the juvenile justice system when her 11-year-old son was incarcerated for a low-level misdemeanor.
Jackson has also been a parent representative for the Texas Coalition Advocating Justice for Juveniles and she worked with the Texas Reconciliation Project to unite Latino and African-American communities in promoting social and economic equity and justice. She also gave critical testimony and worked to pass Texas Senate Bill 103 and is a SOROS Fellow and a member of Community Justice Network for Youth.

In her free time she co-chairs the Harris County, Texas, JDAI/DMC subcommittee. Last year, the Bill of Rights Defense Commission presented her with its Patriot Award.