What the Data Say About Race, Ethnicity and American Youth 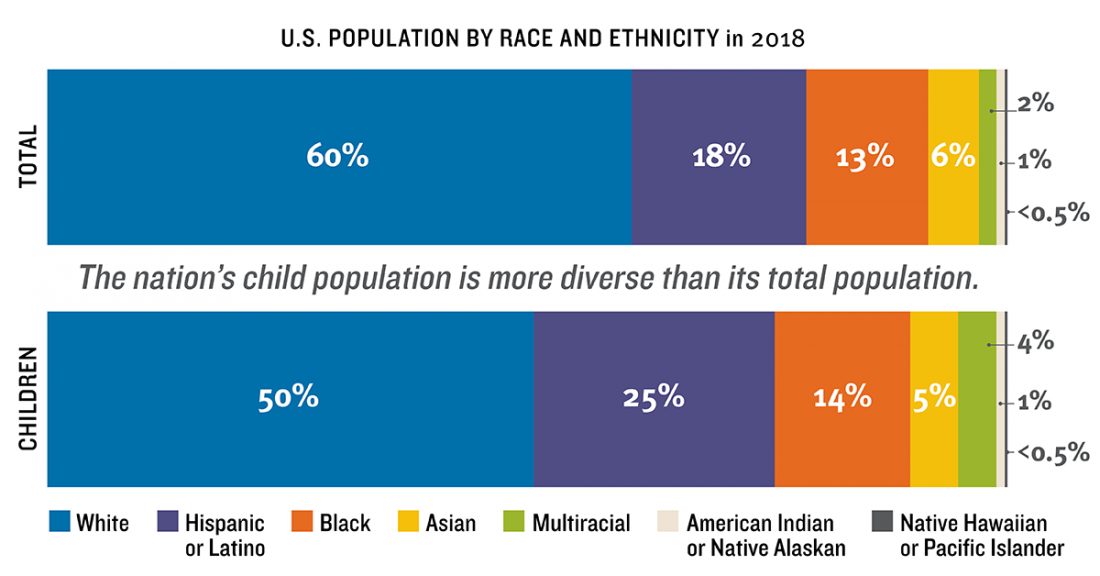 In 2018, 50% of the nation’s child population was described as white. Beyond this group, 25% of children were described as Hispanic or Latino; 14% as Black or African American; 5% as Asian; 4% as multiracial; 1% as American Indian or Native Alaskan; and less than 0.5% as Native Hawaiian or other Pacific Islander.

The nation’s child population is more diverse than its total population. One factor increasing diversity among children is immigration. Another contributing factor? An increase in interracial relationships, which has boosted the percentage of multiracial kids nationwide.

For an analysis of racial and ethnic disparities among children, see Race for Results: Building a Path to Opportunity for All Children. 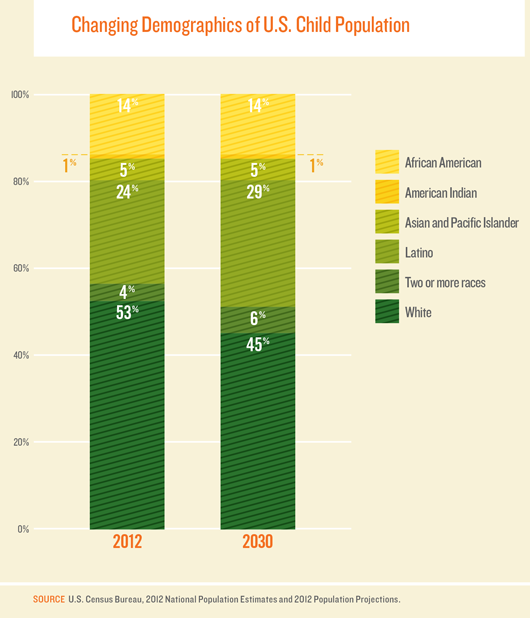 How the United States defines race and ethnicity

Racial definitions are not static constructs based in science or biology. In fact, the way racial groups have been defined and measured in the United States has changed dramatically over time and continues to evolve, along with the country’s changing demographics.

In developing the state and national-level data included in this report, we used the race and ethnicity categories currently defined by the U.S. Office of Management and Budget (OMB) for use by federal statistical agencies. They are as follows:

This category includes people who identify as being Black or of African descent and may include people from the Caribbean.

This category includes people who identified as belonging to an American Indian or Alaska Native tribal group.

This category includes people who selected Hispanic, Latino or Spanish origin, defined as an ethnic group by the OMB. People who chose this category can be of any racial group and include people from Mexico, Central and South America and other Spanish-speaking countries.

This category includes those who selected Native Hawaiian, Samoan or Other Pacific Islander group.

This category includes people who identify as white or Caucasian and have European ancestry.

This category includes people who chose two or more of the racial categories above.

As the national data show, no one group has all children meeting all milestones. African American, American Indian and Latino children face some of the biggest obstacles on the pathway to opportunity.

The table below displays the indicators disaggregated by race. In comparing results across the areas represented in the index, we have grouped the indicators into four areas — early childhood, education and early work experiences, family resources and neighborhood context.

For the full analysis of racial and ethnic disparities among children, see Race for Results: Building a Path to Opportunity for All Children. 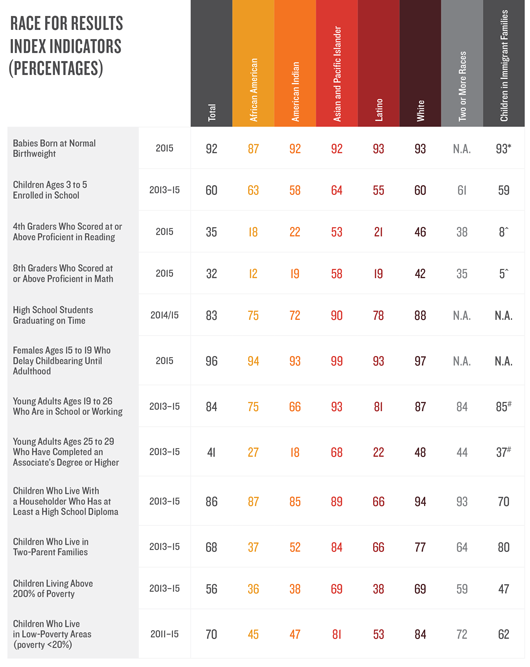 About the U.S. Census Bureau

The Census Bureau — our nation’s primary source of population data — has changed how it measures race and ethnicity over time. Today, the bureau tracks five categories: 1) white; 2) Black or African American; 3) American Indian or Alaska native; 4) Asian; and 5) native Hawaiian or other Pacific Islander.

Since the 2000 Census, respondents have been able to identify as more than one race. Separately, the bureau also tracks how many people identify as Hispanic, which is a designation that can apply to individuals of any racial category.

See more statistics on kids, disaggregated by race and ethnicity, in the KIDS COUNT Data Center