Paul Revere Rides Again: Inside the Remarkable Rise of the Houston Public Schools 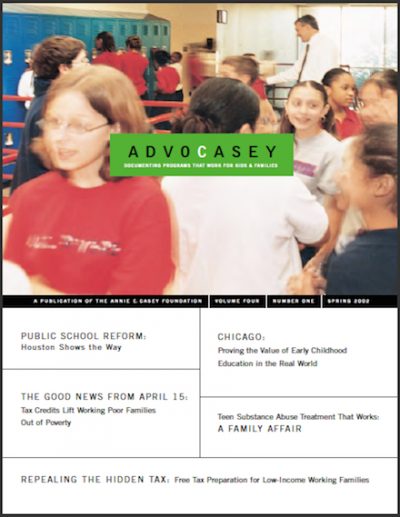 This issue of AdvoCasey starts with an article examining the academic transformation of schools in Houston, then delivers a story on Chicago’s Child-Parent Centers before moving to Miami to spotlight innovative treatments for substance-using teens. The final story lands in Tulsa, Okla., and tells how a local nonprofit is helping working poor families avoid expensive tax preparation fees, maximize refunds and save for the future.

AdvoCasey is a seasonal publication of the Foundation that covers some serious ground. Each themed issue spotlights programs and policies that have made measurable differences in the lives of kids and families.

In 2000, the Earned Income Tax Credit helped lift 4.8 million Americans — including 2.6 million kids — out of poverty.

Some families have to complete up to six separate worksheets in order to file for the EITC.

If every state enacted a refundable earned income credit valued at 25 percent of the federal EITC, we could move an additional 570,000 children above the poverty line.

Increasingly, the federal tax code for low-income families — while offering a wealth of possible benefits — requires filers to navigate a swamp of complicated forms, instructions and worksheets.