Juvenile Justice at a Crossroads 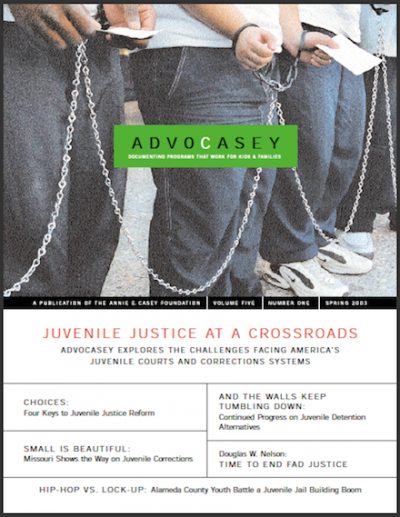 The bad news? When it comes to America’s juvenile justice system, failure, waste and even abuse of troubled youth are rampant. The better news? Thanks to promising reform efforts and policy innovations, which this publication explores, the prospects for progress have never been stronger.

AdvoCasey is a seasonal newsletter with themed issues that spotlight programs and policies making measurable differences in the lives of kids and families.

America’s juvenile detention problem? We’re too dependent on it

Only 26 states reported any data on the recidivism rates of youth leaving juvenile corrections programs, according to a 1999 survey.

In the 1990s, 49 states changed their laws to make it easier to try juvenile offenders as adults.

In Florida, 55% of youth in juvenile facilities and 34% of youth in adult prisons reported that they expected to remain crime-free post-release.

At every level of the juvenile justice system, ethnic and racial minorities are treated more harshly than white youth.

Nationwide, more than 100,000 delinquent teens are held in custody every day at costs ranging from $100 to more than $300 per day.