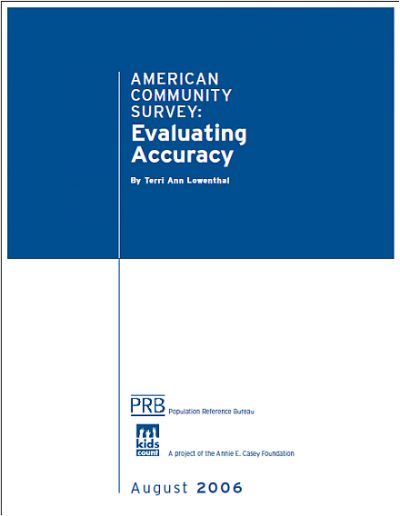 This report examines the differences and data accuracy in survey methodology between the American Community Survey (ACS) — a monthly survey designed to collect community-level data — and the 2000 Census population counts. Both provide valuable but different information to guide policymakers and corporate leaders, with the ACS being the only source of social and economic data for all communities in the country.

Unlike the census, the ACS is not designed to provide total population counts.

The primary purpose of the ACS is to produce profiles of key population and housing characteristics for state and local communities.

Unlike the volunteer status of the census, ACS interviewers are full-time, permanent employees who receive extensive training in survey techniques.

Data collected in the ACS and in the census are more likely to be comparable if the wording of questions in both surveys is similar, because interviewers and respondents are less likely to interpret the questions differently.

Not enough is known about coverage in the ACS to draw definitive conclusions about the extent of any “undercount” or “overcount” in the survey, as we understand those terms in the census context.