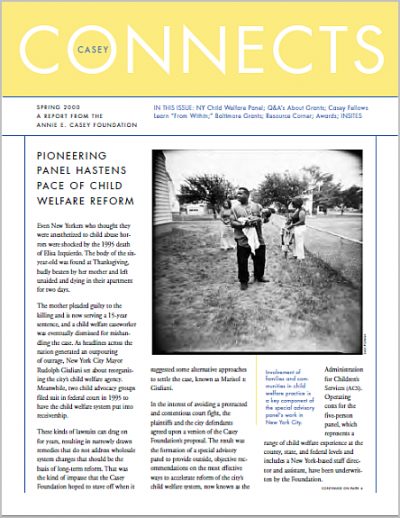 Hitting at the core of radical change and reform, this issue of Casey Connects proves how true transformation starts with the heart — the heart of an individual as well as the heart of a public system. National reform, local reform and personal transformation share the spotlight as three Casey agendas are dissected. A smaller story highlights awards and honors bestowed upon Casey grantees.

The bottom line: When it comes to child welfare reform, we must do more to support our nation's most vulnerable families

The Children and Family Fellowship, launched in 1993, taps mid-career professionals who have demonstrated success in spearheading positive change on behalf of kids and families.

Since 1995, the Baltimore Direct Services Grants Program has funded more than 130 nonprofit organizations that work directly with kids, youth and families in the Baltimore community.

The Fellowship is an intensive, full-time program that lasts 11 months.

In the interest of avoiding a protracted and contentious court fight, the plaintiffs and the city defendants agreed upon a version of the Casey Foundation’s proposal.